Dustin Poirier, the two-time conqueror of Conor McGregor, will get another opportunity to claim UFC gold amid reports that he has signed on the dotted line to challenge Charles Oliveira for the UFC lightweight title in December.

Poirier came up short in his last bid for undisputed UFC gold when he was submitted in the third round by then-champ Khabib Nurmagomedov in what was the Russian’s penultimate title defence in the UFC, but has been granted another crack at the title belt against his successor Oliveira, per a report by MMA Fighting.

The US outlet states that an agreement has been made in principal between all parties for a headline bout at December 11th’s UFC 269 event. Confirmation from the UFC is expected in the coming days or weeks.

Looking at his resume, it is easy to see Poirier has been drafted into the second undisputed world title bout of his career after impressive recent showings against McGregor, Justin Gaethje, Eddie Alvarez and Dan Hooker.

The Louisiana native is considered by many to be the division’s standout pacesetter following Khabib’s retirement earlier this year, and even turned down a title opportunity to pursue a lucrative third fight with long-time rival McGregor.

And with that money now well and truly banked, gold is next up on his list – and his candidacy for the world title has already been endorsed by Nurmagomedov.

“I believe that now Poirier deserves to be a champion. That’s my opinion. Look at the fighters he’s fought: Jim Miller, Eddie Alvarez, Anthony Pettis, Max Holloway. These are all top fighters and they could end up in the UFC’s Hall of Fame,” the Russian star said earlier this year of his former opponent.

A win won’t come easy, however. In Oliveira, the UFC have a champion who is in the best form of his veteran career and will come into the fight seeking his tenth straight win the shark tank lightweight division.

While early knocks on Oliveira suggested that he was a soft touch in the division, he has added a gritty element to his game in recent bouts and has been rewarded by a string of impressive wins against the likes of Michael Chandler, Tony Ferguson and Kevin Lee.

Whether or not he can added Poirier to his list of victims will be revealed in October but, with Khabib gone and McGregor well and truly off the shelf for a while, there is little doubt that these fighters represented the best of the UFC’s lightweight division.

And with that, you can expect fireworks. 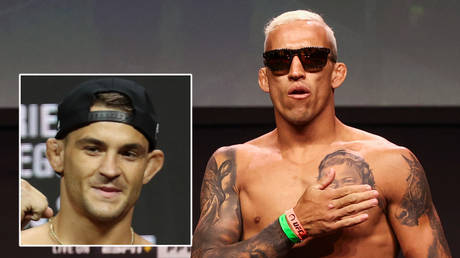 Ronaldo accused of aiming PUNCH at...