There is confusion surrounding a positive Covid-19 test for Liverpool and Egypt forward Mohamed Salah, just days after he was spotted surrounded by guests at his brother’s wedding earlier this week.

Salah is currently on international duty with Egypt, preparing to face Togo in an Africa Cup of Nations qualifier on Saturday.

The Egyptian FA tweeted on Friday that the forward had tested positive for coronavirus and would now self-isolate for the required period.

However, that message was soon deleted and replaced with one not mentioning Salah by name, instead stating that there would be a retest for three players from Egypt and Togo.

“The laboratories of the Ministry of Health have indicated that three players from the Egyptian and Togo teams have tested positive before the match between the two teams tomorrow,” the new tweet read.

“Other tests will be conducted for the aforementioned players to determine their position on participation.”

The news of a possible positive test for Salah would not only come as a blow for Egypt – who face a double-header against Togo in the next four days – but also club team Liverpool, as the prolific striker could be ruled out of the Premier League clash with Leicester at Anfield on November 21 as well as the home Champions League game against Italian club Atalanta on the following Wednesday.

The confusion over Salah’s case will provide more ammunition for critics who have questioned the logic of footballers crisscrossing the globe for international matches as the pandemic continues.

In Salah’s case, he was filmed attending his brother Nasr’s wedding in Cairo earlier this week, dancing while surrounded by guests, not long before joining up with the national team. In part of the footage the footballer was wearing a mask, but in some clips he could be seen without his face covered.

Mo Salah tests positive for Covid after doing this at a wedding. Seriously, we need to stop players leaving their club bubbles amid this pandemic.

International breaks are not working on so many levels #LFC pic.twitter.com/02WzezFVuk

“Mo Salah tests positive for Covid after doing this at a wedding. Seriously, we need to stop players leaving their club bubbles amid this pandemic. International breaks are not working on so many levels,” wrote football reporter Kevin Palmer.

Elsewhere during the current international break, Liverpool boss Jurgen Klopp saw central defender Joe Gomez suffer a serious knee injury during training with England which is set to rule him out for the remainder of the season.

The Premier League champions have already lost talisman Virgil van Dijk, likely for the rest of the campaign, after he was injured by Everton goalkeeper Jordan Pickford in the Merseyside derby last month.

While Salah would be ruled out only in the short term with a Covid-19 diagnosis, it could still add to a selection headache for Klopp with the visit of high-flying Leicester approaching. 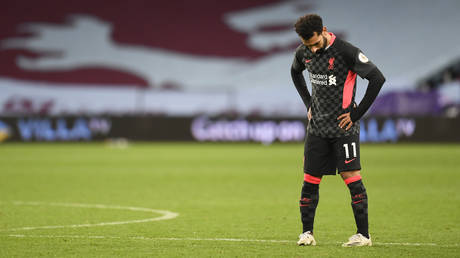 Image of secret Apple headphones a...