Center Hassan Whiteside, who appeared to have ranted ‘f*ck America’ and pledged to move to Hawaii during the presidential election debate, has issued a statement after initially joking about the tweet, which he said was not his.

A photoshopped tweet purporting to be from Whiteside was shared widely during the first debate between candidates Donald Trump and Joe Biden, appearing to show the Portland Trail Blazers star despairing of his country as the politicians rowed with each other.

The message was doctored to show a despairing White telling his following of almost 186,000: “I can’t do this for four more years.

Whiteside is known for his prolific presence on social media and courted controversy last year when he exuberantly expressed his joy at leaving the Miami Heat for the Blazers.

He initially joked about the impersonation in a video telling his apparent imposters that they “ain’t gotta make fake tweets” to earn “clout”, only to see an increasing number of accounts take the words as his and react angrily.

In a post that was also shared with his Instagram following of more than 763,000 the following day, Whiteside’s tone turned as he spoke of his “integrity” and patriotism being questioned because of a “completely false, photoshopped picture of a tweet I never posted.”

“What upsets me most is that it reflects exactly the opposite of how I feel about this country,” he explained. “I have never and would never say what that tweet said.

“I am proud to be from America and there is no other place in the world that I want to live.”

Sharing a later post that accused him of spreading hate and fear, he retaliated: “You realize this is a photoshopped tweet?

“Sad thing is, you all believe anything you all see. Before you drop knowledge, do your research.”

Whiteside, whose first season with the Blazers ended with an NBA playoffs defeat to West Conference champions the Los Angeles Lakers, did offer fans some advice on next month’s election.

“One of the greatest things about this country is that we all have an opportunity to make our voices heard through voting – a freedom that doesn’t exist in every single country in the world,” he said.

“So please, exercise your right and make a point to vote this November.” 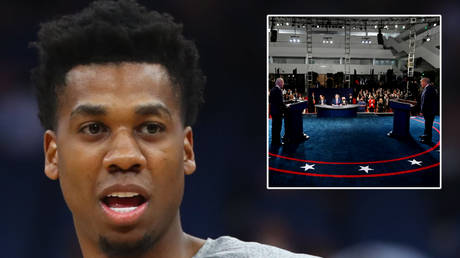 Arrest of Hamas co-founder by Isra...