Mike Tyson may have his hands full ahead of his mooted exhibition with old rival Evander Holyfield, but the 54-year-old has showcased his fists in a bizarre return to wrestling ring which has left some fans scratching their heads.

Tyson’s “Legend’s Only” comeback tour looked set to continue later this year in a third bout against former-rival Evander Holyfield before that bout hit the  buffers, but the boxing legend is clearly keeping himself busy – as he once again dabbled in the world of pro wrestling.

‘Iron Mike’ showed off a physique which would rival pugilists several decades his junior when he ripped off his shirt before attacking wrestler Shawn Spears with a barrage of blows in the All-Elite Wrestling ring, before embracing the company’s top star, Chris Jericho.

This comes after Tyson and Jericho had previously come to blows in another professional wrestling spectacle some months prior.

Tyson, though, didn’t get the reaction online that he might have been expecting, with many wrestling fans not holding back their thoughts on the former heavyweight champion’s pantomime performance.

This was complete shit but happy for Tyson collecting a check

How is Tyson gonna be the enforcer for next weeks match when he just showed us that he’s on @IAmJericho ‘s team? This week has been a let down in regards to creativity and amusement.

As a die hard #AEW fan, I think I speak for all of us when I say we don’t want Tyson here. I think it serves us best for the future to release him to #WWE and rebuild this sorry franchise. Please release Iron Mike to #WWE for whatever they offer you ASAP #Dynamite

One fan didn’t hold back in their appraisal of Tyson’s appearance, writing: “This was complete sh*t but happy for Tyson collecting a check.”

“As a die hard AEW fan, I think I speak for all of us when I say he don’t want Tyson here,” another declared, before calling on AEW to “release” the boxing icon.

A third summed up the appearance as “a let down in regards to creativity and amusement.”

Tyson has had several dalliances with professional wrestling in the past, appearing in some keenly-received angles in the halcyon days of the WWE two decades ago – but fans appear to be growing weary, particularly after he was caught on camera YAWNING at a previous AEW event.

And judging by the reaction to his latest stint, the veteran boxer might well be looking forward to dodging real fists from Holyfield later this year when compared to the social media salvos being sent his way by leagues of surly wrestling fans. 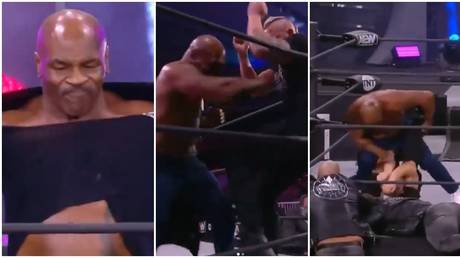