MMA fighter Ben Sosoli, nicknamed the ‘Combat Wombat,’ has been sentenced to 22 months in prison and reportedly had his UFC contract cancelled after he broke a man’s jaw with a single punch outside a bar in Toorak, Melbourne.

The 30-year-old had pleaded guilty to recklessly causing serious injury after he fractured the man’s jaw on September 8 last year and left him needing specialist facial surgery.

Sosoli was working at the Jacksons Lounge Bar as a Responsible Service of Alcohol officer when he apprehended a patron at 2:20am. The man had twice sneaked in, having been denied entry by security guards for being too drunk.

The heavyweight proceeded to walk the victim outside, threw him on the ground and then punched him in the jaw after he attempted to free himself.

Per The Australian, Sosoli’s lawyer Zarah Garde-Wilson had argued the man had threatened to stab the security staff and had struck the fighter in his arm and face while being removed from the bar.

Sosoli also told police the man was “threatening to f**k [him] up,” but on Monday judge Gavan Meredith told him: “You are expected not to respond to provocation in the way you did.”

Prosecutor Jordan O’Toole said the victim’s jawbone was fractured on both sides of his face and that three of his teeth were also fractured in the assault.

A doctor also said there was a risk the injury might never fully heal due to its severity.

Sosoli must serve at least half of his sentence before he is eligible to be considered for parole.

The fighter has a 7-3 record in MMA, most recently losing via TKO to Marcos Rogerio de Lima at UFC Fight Night 168 in February. 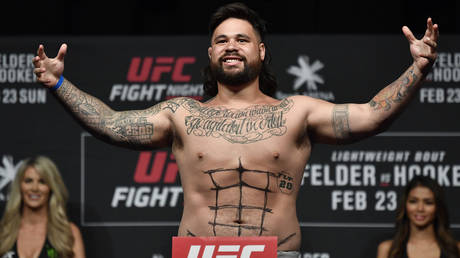