Russian heavyweight Alexander Volkov celebrated his 32nd birthday in style with a TKO finish of Walt Harris on the main card of UFC 254 on “Fight Island.”

Volkov’s last fight, a loss against Curtis Blaydes back in June, was a frustrating one for the Moscow native as he spent much of the contest fighting off takedown attempts from the American wrestler.

Saturday’s comeback fight against Harris saw Volkov in far more familiar territory as he dominated every aspect of the striking en route to a win which once again places his name among the heavyweight division’s list of contenders.

The 6ft 7in Russian used his lengthy frame to great effect, standing at range and dictating the pace of the striking exchanges. Harris’ winging hooks failed to find a consistent home, with “Drago” constantly threatening with pinpoint jabs when Harris stepped into the pocket.

Soon, the damage began to take a toll. Harris appeared tired at the end of the first and got no better early in the second, after Volkov launched a teep kick to the American’s gut which instantly sent him into retreat.

Smelling blood, Volkov swarmed and he claimed what was his 32nd career win on his 32nd birthday.

Wow. Volkov looked so calculated tonight. That karate won it for him in the end, but the range management and shot selection was spot on #ufc254

Volkov asking for a fight that gets him to the title pic.twitter.com/TDSFYdxrX4

Talk will now turn to what might be next for Volkov. But with current champion Stipe Miocic expected to defend his title against Francis Ngannou before long, there appears to be plenty of room for the next contender to emerge from the pack.

Volkov certainly did his chances no harm whatsoever on “Fight Island” on Saturday night. 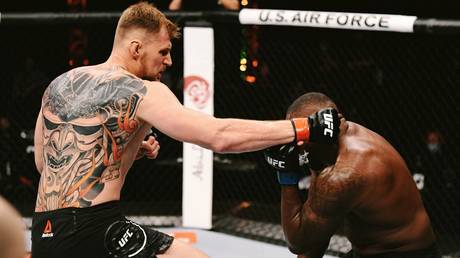