Premier League goal king Harry Kane will have the final say on whether he leaves Tottenham for Manchester City after Euro 2020, according to a report claiming the champions have made a huge bid for him including swap options.

The sought-after striker has strongly hinted that he is yet to make his mind up about leaving lackluster Spurs this summer, with City obvious contenders to pounce should the Tottenham talisman decide to end his wait for trophies at the club where he has spent his entire senior career.

Mega-wealthy City have now tabled an offer of around $140 million and dangled a further carrot or two in the form of potential swap deals for some of their stars in order to sweeten the deal, according to transfer expert Fabrizio Romano.

Manchester City made an official proposal to Tottenham for Harry Kane. £100M guaranteed + availability to include players in the deal.#THFC have NO intention to accept. Harry wants to go, but Levy will try to keep him. ❌

Harry now focused on the Euros, then it’ll be decided.

Kane is said to be focused on Euro 2020, where he has faced some criticism after failing to score in England’s first two matches and was hauled off in the underwhelming 0-0 draw against Scotland at Wembley on Friday.

Were he to attempt to force his way out, the 27-year-old could be lining up against Spurs in their season opener on August 14, when they host City at the Tottenham Hotspur Stadium.

Spurs are still without a permanent new manager more than two months after Jose Mourinho was axed during a wretched second half to the season – and that indecision, coupled with the likelihood of his next contract being the last during his peak career years, could influence Kane’s destination for next season.

There has been fervent speculation over his willingness to create a stand-off with Spurs, and his loyalty will undoubtedly be tested by talk of a move to join a squad that he has admitted would create ample chances for him.

Kane signed a six-year contract at Tottenham in 2018. 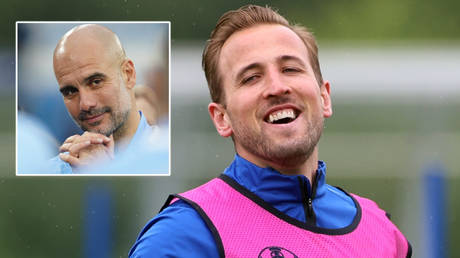