Neymar, the world’s most expensive footballer, has been accused of a shocking racial slur towards Marseille’s Japanese player Hiroki Sakai, amid his own claims that he was racially abused by Sakai’s teammate Alvaro Gonzalez.

Spanish-language outlet Cadena SER alleges the Brazilian forward used the slur “Chino de mierda” [Chinese sh*t in Portuguese] toward Sakai, even though he isn’t from China, using lipreading techniques from footage of when the two clashed in an ill-tempered 1-0 PSG home defeat earlier this month.

So many people talking bullshit against @neymarjr forgettin that the so called Spanish #cadenaser can put up anything just to have a go at Neymar? take a look at Sakai, his reactions alone will tell you that all this Cedana report is bullshit

Racism is not okay in any form

He isn’t even Chinese 😭

Sakai seems oblivious to the alleged slur, probably because of his lack of understanding of the Portuguese language, although the only available evidence currently is the clip reportedly accessed by Cadena SER.

The PSG forward was one of five players sent off in the dying seconds of that game, and was slapped with a two-match ban for slapping another Marseille defender, Alvaro Gonzalez around the head, which he claimed was in retaliation for a racial slur from the Spanish centre back.

Neymar accused Gonzalez of calling him a “monkey son of a bitch” although the Spaniard vehemently refuted the claims and was backed by his teammates and coach.

Now the 28-year-old is having to defend himself against accusations of racism from Marseille, who had stood by Gonzalez which included manager Andre Villas-Boas warning Neymar of the impact of “false allegations”.

A Spanish television network also allege Neymar was homophobic towards Gonzalez, calling him “a f*cking queer”, although the Brazilian been backed by teammate Marquinhos, who says that his countryman would never utter such words. 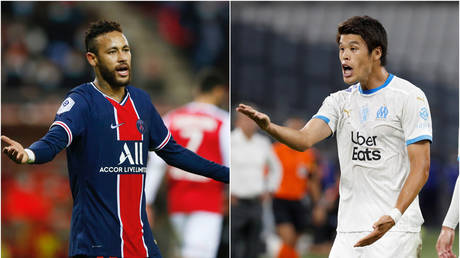