Wearing his signature pair of shiny gold shoes, 37-year-old Chinese colossus Lyu Xiaojun has become the oldest competitor to win weighlifting gold at the Olympics, while Qatar has its first ever champion at the Games.

Legendary veteran Lyu managed a mammoth 170kg (375lb) in the snatch and 204kg (450lb) in the clean and jerk for a total of 374kg (825lb), giving the 37-year-old hulk a repeat of the gold he won in 2012 and fueling his desire to continue his astonishing feats in competitive weightlifting.

There was a moment of concern for Lyu when Antonino Pizzolato, his Italian rival who eventually won bronze, unsuccessfully attempting a world-record 210-kilogram (463lb) clean and jerk, which Lyu also could not lift.

“It’s a beautiful art and maybe that is why I can be an athlete for such a long time. This is not my last competition.”

A willing father figure to younger competitors, Lyu admitted he is eager to see his children again and told his fans that they can expect to see him at the 2024 edition if he succumbs to the temptation of participating in the world championships in his homeland next year.

“If you see me next year, you will see me in Paris,” he added, by which time he could have another Olympic gold medal if Nijat Rahimov, of Kazakhstan, is suspended.

Rahimov beat Lyu to gold but has been suspended on suspicion of switching urine samples in a potential second doping offense of his career.

There was more joy for a fearsome weightlifter in the 96kg (211.5lb) category, in which Fares Elbakh became Qatar’s first Olympic gold winner, setting new records for the clean and jerk with a 225kg (495lb) lift and the total lift, hitting 402kg (886lb).

“Thank god it worked out for us,” said Elbakh, explaining that he had concentrated on early clean and jerk attempts in the final. “It was a bit of a gamble but it was worth it. And we stood up to the challenge.”

Elbakh won Qatar’s sixth Olympic medal, although he missed out on an attempted world record 232kg (511.5lb) clean and jerk.

“I feel great. I feel incredible,” he added, pledging to keep targeting the world record. “This is not an end; we still have more and coming soon, and we will do our best to make it even better.” 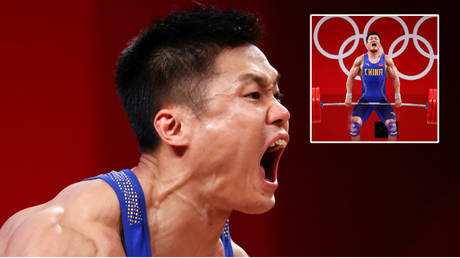 ‘I would love nothing more than to...