‘Chelsea want to be there’: Jurgen Klopp says Roman Abramovich’s BIG MONEY moves will put Chelsea ‘on the front foot’

‘Chelsea want to be there’: Jurgen Klopp says Roman Abramovich’s BIG MONEY moves will put Chelsea ‘on the front foot’

Liverpool manager Jurgen Klopp has admitted that Chelsea owner Roman Abramovich’s continued outlay during quarantine has given his club the lead in the transfer market – but warned that now “might not be the best time to buy.”

Chelsea pounced on Liverpool’s reluctance to proceed with a transfer bid for Timo Werner while the Premier League was suspended amid the pandemic, activating the Germany striker’s release clause of around $57 million to seal his signing for next season.

A frustrated Klopp called Werner to explain why he could not advance with his pursuit of the forward shortly before Chelsea made their move, but the pragmatic coach has accepted that the reigning Champions League winners are unable to match Abramovich’s unabated spending during the crisis.

“Chelsea are already showing they want to be there next season,” Klopp told the Guardian, speaking ahead of the league leaders’ visit to Everton on Sunday when they can take a major step towards winning the Premier League after a break of more than three months.

“You can see Chelsea are pretty much off on the front foot in the transfer market but no-one else has done anything much because the times are so uncertain. If someone were to say, for example, that you can’t play football in front of supporters until 2023, that would change the whole thing.

“I don’t really think that will happen but you cannot just assume everything is going to be fine for the next season. It seems a good time to wait a little bit.”

Abramovich has already bankrolled the arrival of highly-rated playmaker Hakim Ziyech from Ajax this year for a fee that could rise to more than $48 million, while the Blues have been strongly linked with a move for Leicester defender Ben Chillwell, who is expected to cost more than $72 million.

“It’s like if you live in a flat but want to buy a house,” suggested a typically philosophical Klopp. “This might not be the best time to buy the house. You would want to wait and see how the situation develops.

“It feels a little bit like that in the football club as well. We may not be in the most beautiful flat ever, but it’s pretty good. We should not forget that.”

Klopp has watched from afar as English clubs have played their part in supporting healthcare efforts during the pandemic, including a combined charitable effort led by Reds captain Jordan Henderson and the provision of thousands of meals for NHS staff at Chelsea’s Stamford Bridge home.

“I don’t know why [England] waited until June 15 to start wearing face masks in closed areas, when all the other countries were doing it five or six weeks ago,” he argued, having been visibly irate at fans who tried to high-five him ahead of Liverpool’s last Champions League match in March.

“You can argue about whether it makes sense to wear them but all the countries who started doing it earlier have smaller casualty numbers than England. That’s the truth.

“When I go to a petrol station in England, I am the only one with a face mask and gloves. I feel like an alien, but I won’t stop until someone tells me it’s over.”

Liverpool enter their meeting with their arch-rivals knowing that they need a maximum of two wins from their remaining nine league fixtures to seal the Premier League title. 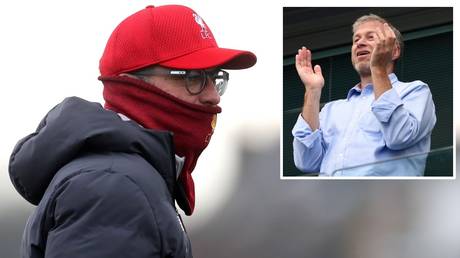