Chelsea and England star Reece James has issued a plea for information after his Champions League winner’s medal and Euro 2020 runners-up medal were stolen from his home while he was playing against Zenit St. Petersburg.

The 21-year-old wing-back took to Instagram to detail how a number of burglars had gained entry to his home while he was on Champions League duty with Chelsea at Stamford Bridge on Tuesday night, during which time they seized property and and stole a heavy safe which contained several of the England international’s valuable mementos

“I never keep any jewellery of mine in my house so all that was contained in the safe were my Champions League winners medal and Super Cup winners medal and the runners-up medal for the Euro 2020,” James wrote.

“These medals were won representing Chelsea and England – honours that can never be taken away from me whether or not I have the physical medals to prove it.“

Footage showing the robbery was shared by James to social media, and he added that police are following up several leads of enquiry as they hunt the thieves.

“Nevertheless, I am appealing to all my Chelsea and England fans to help identify and turn in these low-life individuals who will never be able to rest easy as the evidence is mounting against them,” wrote James.

“The police, my advisers and Chelsea FC (and many others) are all behind me as we have firm leads on who the perpetrators are. We are closing in on them.

“Luckily, no one was present during the break in but I want to let all of you know I am safe and well. I really do appreciate having the platform to tell you all about my misfortune and I hope together we can catch these individuals and deliver justice where it is due.”

James played the full 90 minutes for Thomas Tuchel’s side as they eked out a 1-0 win against Zenit thanks to a second-half goal from Romelu Lukaku.

The Chelsea academy graduate played a significant role in the Blues’ second Champions League triumph this year and played the entire game against Manchester City in May as Tuchel’s side claimed the trophy thanks to a single goal from German star Kai Havertz.

James was also a member of England’s squad which lost on penalties to Italy in the Euro 2020 finals this past summer at Wembley.

James joins an increasingly lengthy list of famous who have had their homes ransacked while playing for their clubs. Two years ago Liverpool star Sadio Mane also had his home burgled while playing in the Champions League.

On the other side of the Mersey, ex-Everton skipper Phil Jagielka and his family were held at knifepoint by thugs who invaded his home and demanded access to his safe.

More recently, Arsenal’s Sead Kolasinac earned several plaudits for fighting off a gang of knife-wielding thieves who attempted to hold him and former Gunners teammate Mesut Ozil up. 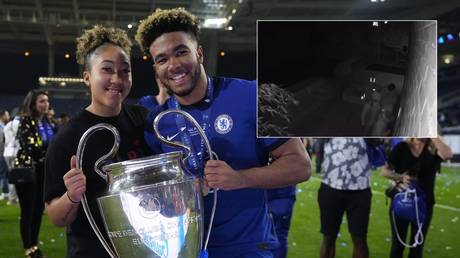