One of the summer’s longest-running transfer sagas appears no closer to a conclusion after reports that Chelsea and Bayer Leverkusen remain at an impasse over agreeing a transfer fee for German wonderkid Kai Havertz.

The 21-year-old has been linked with a move to the Premier League club for several weeks now but there remains some distance between the Bundesliga side’s demands and the amount that the Londoners are willing to pay for the player widely regarded as one of the top young talents in world football.

Chelsea are understood to have submitted an official offer of £58.6 million ($77.3 million) with a further £13.5 million ($17.8 million) in add-ons, but this remains below Leverkusen’s asking price of around £90 million ($119 million) – a figure they appear determined to hold out for before offloading their prized asset.

Havertz and Chelsea are understood to have agreed personal terms for a five-year deal with Frank Lampard’s team but will have to swell their offer considerably – potentially via further add-ons – to get the deal over the line.

It was reported on Tuesday that Leverkusen have set at August 28 deadline for a deal to be reached as they want the situation to be concluded well in advance of the start of the new Bundesliga campaign on September 18.

Chelsea have already added German international Timo Werner and former Ajax playmaker Hakim Ziyech to their ranks ahead of next season, and are also poised to make at least one reinforcement to their defensive ranks – but the signature of Havertz remains the club’s key piece of business this summer.

Both Bayern Munich and Real Madrid are known to be suitors of the German star but the current Covid football economy means that they cannot spare the necessary funds required to complete a deal of this magnitude – leaving Chelsea in pole position. Havertz is also understood to be pushing for the move after Leverkusen failed to qualify for next season’s Champions League.

Chelsea, meanwhile, remain light in their wide attacking positions after veterans Willian and Pedro left the club this summer following the expiration of their contracts, leaving squad space open for the highly-rated Havertz to make an impact on the side – so long as a deal is struck to send some of Roman Abramovich’s millions to Germany before Leverkusen’s self-imposed deadline strikes. 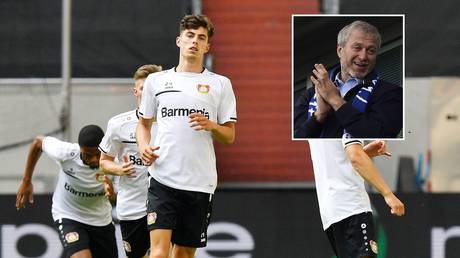