Roman Abramovich looks set to open his Chelsea checkbook once more to bring in Ben Chilwell from Leicester City and Thiago Silva from Paris Saint-Germain, but the big-money Kai Havertz deal remains far from completion.

Frank Lampard’s overhaul of his squad at Stamford Bridge has already seen the arrivals of Timo Werner and Hakim Ziyech at no small cost.

But with the novice Chelsea boss and Abramovich are in agreement that money must be spent to bridge the chasm which exists between the West Londoners and the well-oiled projects at Liverpool and Manchester City.

According to numerous reports on Saturday, England international left-back Chilwell is near to finalizing a deal to join Chelsea where Lampard hopes that the 23-year-old will shore up the problematic left-sided defensive position for much of the next decade.

Lampard has remained steadfast in his pursuit of the 11-times capped England international, even with less expensive options like Nicolas Tagliafico from Ajax and Sevilla’s on-loan Sergio Reguilon also understood to be on the market.

As reported yesterday, Chelsea are also pursuing a deal with 35-year-old Paris Saint-Germain captain Thiago Silva who is tipped to end his association with the French giants after Sunday’s Champions League Final.

Chelsea’s principal target, however, remains Kai Havertz. The German prodigy, considered by many as among the top young talents in world football, has been linked with a move to Stamford Bridge for much of the summer – with the player himself understood to have communicated his desire to move to the Premier League.

Havertz’s team, Bayer Leverkusen, has been locked in negotiations with Chelsea this week, but so far the clubs remain far apart in their valuation of the player.

“There is nothing new in this regard, and we are still very relaxed about it,” said Leverkusen sporting director Rudi Voller.

“Of course we would be very happy if he stayed for another year. It is clear that the departure of such a player, despite the high transfer fee, always means a loss – see Leipzig and [Timo] Werner.

“In times of corona it may actually be that the transfer fees have decreased for many players,” he continued. “But corona or no corona – this is not the case with exceptional players like Havertz or Jadon Sancho. There is no corona discount for them.” 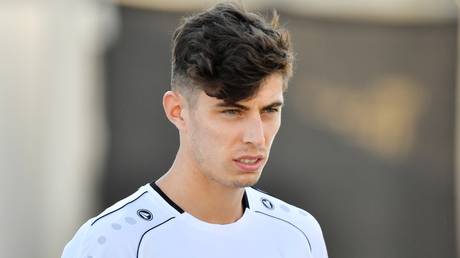