Finnish flyer Valtteri Bottas won the opening race of the 2020 Formula 1 season at the Austrian Grand Prix after a dramatic finale that saw teammate Lewis Hamilton denied a podium by a penalty and a hard-charging Lando Norris.

Bottas led from start to finish in a race that saw him avoid trouble while drama unfolded behind him in a frenetic race at the Red Bull Ring in Spielberg, Austria.

Before the race started, the drivers gathered at the start line to show their solidarity in the fight against racism, though not all of the drivers took a knee.

Charles Leclerc, Max Verstappen, Kimi Raikkonen, Daniil Kvyat, Carlos Sainz and Antonio Giovinazzi opted to stand, rather than take a knee with their colleagues during a disjointed show of support for anti-racism causes across the world.

When the action got underway, the drama continued on track, with the safety car deployed twice during key moments in the race as just 11 of the 20 cars finished the 71-lap race.

Red Bull’s Verstappen – promoted to the front row of the grid after his team’s appeal against Lewis Hamilton’s failure to slow down during a yellow flag during qualifying – looked strong early, but suffered an electrical fault that forced him out of the race early on.

Ferrari’s Leclerc, meanwhile, struggled with pace early, but as the field started to fall away through a combination of equipment failure and driver error, he found himself in with a chance of a podium.

Those chances got even better after Hamilton collided with the charging Alex Albon, whose attempt to overtake the world champion around the outside ended in a collision. Albon’s race was over after being punted into the gravel, while Hamilton’s shot at victory was crushed by a five-second penalty for causing the accident.

With Leclerc only a couple of seconds behind the Brit on the track, it meant Hamilton had to finish five seconds clear of McLaren’s young British driver Lando Norris to preserve a spot on the podium.

It looked like he had enough time in hand as the drivers started their last lap. But Norris produced a stunning final lap to claim the fastest lap of the Grand Prix and snatch the podium away from Hamilton by less than two-tenths of a second.

The race took place without spectators, while all staff on the ground in Austria were required to wear face masks throughout as the Formula 1 season began under COVID-19 restrictions.

The action will return to the same circuit next weekend for the second round of the championship. 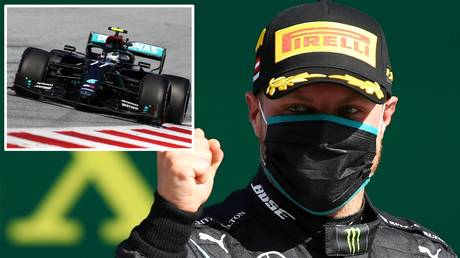