‘Change the flag or I won’t be representing this state’: College football star demands changes to Mississippi flag

‘Change the flag or I won’t be representing this state’: College football star demands changes to Mississippi flag

Mississippi State running back Kylin Hill has threatened to withdraw from team affairs unless the state’s flag, which features confederate imagery, is changed amid the ongoing Black Lives Matter protests.

Hill, who is the top returning rusher in the SEC, made the demand on social media, saying that he will not play for the team until state authorities mandate the change and comes after the SEC, Conference USA and NCAA stated that they will not consider holding championship games in Mississippi until the flag is amended.

Mississippi State coach Mike Leach defended his player’s right to speak out but stopped short of echoing Hill’s request, saying: “The biggest thing is that Kylin is entitled to his opinion just like everybody is.

“If Kylin chooses to express his opinion, I think he should if he wants to. I think he definitely should because all opinions on all issues should be heard. I think that’s where we run into trouble in particular – the dialogue isn’t quite what it should be.

Either change the flag or I won’t be representing this State anymore 💯 & I meant that .. I’m tired https://t.co/IzizpWLoIg

“Not everybody is listening to one another, and I think we have to get to that point. I applaud Kylin’s right to express his opinion really on any subject.”

The state’s governor Tate Reeves has said that any changes to the flag should come from the people, and not from public officials. He tweeted over the weekend that plans for a second flag would not proceed without being co-signed by the public. The last vote on the state’s flag took place in 2001 where voters decided to keep it as it is.

Over the weekend there has been a proposal floating amongst some in the legislature to create a second Mississippi flag. Let’s call it the “Separate but Equal” flag option.

While well-intentioned I’m sure, it does not meet the threshold. pic.twitter.com/f2aOLgV75O

Hill is considered to be one of the top running backs in college football and is thought to have a promising career ahead of him when he enters the professional ranks. His outspoken stance on confederate symbols comes amid an influx of such stances in American sport.

NASCAR recently banned fans from flying the confederate flag at their races in a move which was largely met with enthusiasm by its drivers. However, one driver – Ray Ciccarelli – announced that he was leaving NASCAR because of their flag policy.

Bubba Wallace, the most successful African-American driver in the sport’s history, was an outspoken proponent of the removal of confederate imagery from racetracks, but again made headlines this week when a noose was found in Wallace’s garage. 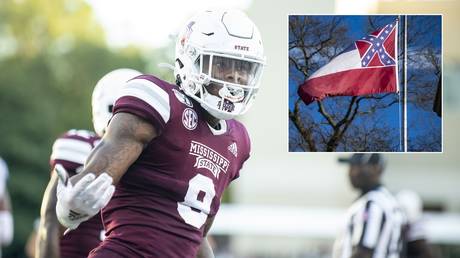 ‘Never seen anything like it’: Fans in disbelief at astounding goal blunder from Arsenal midfielder Xhaka (VIDEO)