Close
Trending News
HomeSportChampions League: No demolition job but record-breaking Bayern do enough to see off Lyon and set up final with PSG

Champions League: No demolition job but record-breaking Bayern do enough to see off Lyon and set up final with PSG

Champions League: No demolition job but record-breaking Bayern do enough to see off Lyon and set up final with PSG

They made harder work of it than in their demolition of Barcelona, but Bayern Munich set up a meeting with Paris Saint-Germain in Sunday’s Champions League final as the Germans eased past Lyon in Lisbon.

After handing Barcelona a quarterfinal defeat so crushing it sent the Catalans into an existential crisis, it was always going to be tough for Bayern to scale those same heights against a spirited Lyon who had shocked Manchester City in their last match.

And so it proved as Bayern put in a performance that was sometimes sloppy but eventually built the momentum needed to roll past their French opponents and into a first Champions League final since the Germans won the competition in 2013.

Hansi Flick’s team rode their luck at times against Lyon at the Estadio Jose Alvalade, especially during a sluggish opening as Lyon broke their opponents’ high back line several times, spurning good chances through Memphis Depay and Karl Toko Ekambi – the latter of whom struck the post in a let-off for the Germans.

But Ekambi and Lyon were made to pay for that profligacy in the 18th minute when Bayern winger Gnabry collected the ball on the right, weaving along the edge of the box until he found space and then thundering a strike across Anthony Lopes’ goal and into the top corner.

It was a moment of brilliance from the former Arsenal man and was the eighth goal of an impressive Champions League campaign for the 25-year-old German international.

The strike seemed to settle Bayern into their rhythm and when the Germans’ second goal arrived 15 minutes later, it also had Gnabry on the end of it.

Lyon failed to clear Ivan Perisic’s low cross and after Robert Lewandowski uncharacteristically failed to turn the ball home, Gnabry was on hand to tap in from close range.

Lyon suddenly looked stretched as Bayern threatened to turn the screw, but Rudi Garcia’s team at least roused themselves at the start of the second half in pursuit of a way back into the game.

Manuel Neuer saved a header from Marcelo in the 55th minute as the French side finally recorded an effort on target, before Ekambi missed a golden chance to reduce the deficit, shooting at Neuer when free at the back post.

Bayern substitute Philippe Coutinho thought he had killed off any faint Lyon hopes when he had the ball in the net in the 80th minute, but the Brazilian’s goal was ruled out for offside.

The difference did become three however when Lewandowski inevitably got on the scoresheet in the 88th minute, rising to head in a cross from Joshua Kimmich.

It was the prolific Pole’s 55th goal of the season and 15th of this Champions League campaign, leaving him just two strikes from Cristiano Ronaldo’s all-time record for a single season in the competition.

Most goals scored in a single UCL campaign: Cristiano Ronaldo with 17.

The scoreline ended 3-0 although the performance from Bayern will have struck less fear into Sunday’s opponents PSG than their destruction of Barcelona did, as Neymar, Kylian Mbappe and Co. will have eyed potential gaps at the back that Lyon came close to exploiting several times.

But despite not being vintage Bayern, the Germans still recorded an incredible 20th straight win in all competitions and became the first team ever to win their first 10 games of a Champions League campaign, and will head into the final as favorites to clinch what would be a sixth Champions League crown. 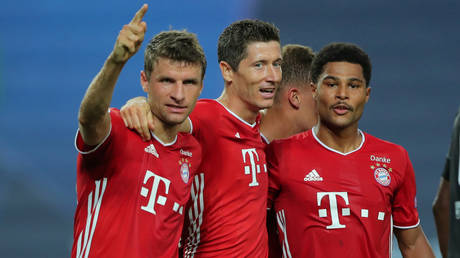