‘Celebration of the year’: Lukaku appears to act out police arrest for Covid breach as Ronaldo keeps dream alive in dramatic derby

‘Celebration of the year’: Lukaku appears to act out police arrest for Covid breach as Ronaldo keeps dream alive in dramatic derby

Fans watched Romelu Lukaku act out being arrested and handcuffed after scoring for Inter against Juventus – but Cristiano Ronaldo had the last laugh after an ultra-dramatic victory for his side in their must-win Italian derby.

Belgium hitman Lukaku was fined by police earlier this week after being caught hosting his birthday party at a hotel in a breach of Covid-19 regulations, and the man who turned 28 on Thursday was in the mood for more celebrations after equalizing from the spot for the newly-crowned champions at the dethroned title holders.

Achraf Hakimi, who was said to have been one of 24 other people in attendance at the bash, obliged by appearing to pretend to be a police officer detaining the shamed striker.

The joke was on Juventus by that time. Urgently needing a win to keep their chances of qualifying for the Champions League alive, the hosts had gone ahead after 24 minutes, when Cristiano Ronaldo saw his penalty saved by Samir Handanovic, reacting quickly to score from the rebound.

Then Achraf Hakimi arrests him 🤨 pic.twitter.com/gKXQzxsGj3

Celebration of the year from Lukaku and Hakimi, absolutely world class 😂

Juan Cuadrado gave Juve the lead again just before the break, Handanovic finding himself deceived by a deflection off Christian Eriksen after the winger had tried his luck from long range, but Juventus felt the pressure increase after Rodrigo Bentancur was sent off for a second yellow card following a challenge on Lukaku ten minutes after half-time.

With Andrea Pirlo desperate to hold out for the three points, the home boss replaced Ronaldo. His plan worked until the 83rd minute, when captain Giorgio Chiellini deflected a cross into his own net.

The goal was initially disallowed. Then, as had been the case for Inter’s penalty, a VAR review resulted in Chiellini being adjudged to have fouled Lukaku, resulting in the goal being given at the added expense of a booking for the defender.

Just when Juve might have felt the game was up, Cuadrado filled in for their departed Talisman by winning and scoring a penalty two minutes from the end of normal time, before Marcelo Brozovic was sent off for Inter.

29 Serie A goals for Cristiano Ronaldo this season ⚽️

Only Lewandowski above him in major leagues in 2020-21. pic.twitter.com/GgAACSqDji

I’m really praying Juventus makes it to the Champions League for next season but it’s a really tight table.

Praying for you Ronaldo and all of Juventus. We gonna pull through. Amen!!! 🙏🏼 pic.twitter.com/GnI4fRe2ig

“I hadn’t taken a penalty for a long time,” admitted hero of the hour Cuadrado afterwards, speaking to Sky Sport Italia. “I felt the trust from everyone and Cristiamo was not on the pitch, so I went for it.

“It was a difficult game against a great team and, with a man down, we had to sacrifice. We won as a team.”

Napoli can send Juventus back into fifth with a win at Fiorentina tomorrow. “We didn’t talk about the Napoli game,” said Cuadrado. “We had to win today and we did it.” 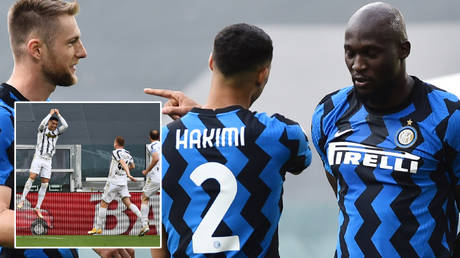