‘Celebration of the tournament!’ Hungary star Fiola TERRIFIES reporter by diving towards crowd after netting vs France (VIDEO)

‘Celebration of the tournament!’ Hungary star Fiola TERRIFIES reporter by diving towards crowd after netting vs France (VIDEO)

Chaotic scenes played out at the Puskas Arena in Budapest on Saturday, as home nation Hungary went 1-0 ahead in front of 61,000 roaring fans in a vital Group F clash against world champions France.

Fresh off a 1-0 win against Germany in their opening game, Les Bleus came into this one heavy favorites.

With strength in depth across a talented squad, they are against most foes – but especially so in this case given Hungary had lost 3-0 to holders Portugal earlier this week.

Cheered on by an ultra-patriotic, flag-waving crowd exceeding 60,000, their reward finally came in stoppage time in the first half.

In scenes described as “absolute bedlam”, Fiola ran over to a poor female reporter’s desk.

“If there’s an award for goal celebration of the tournament then Attila Fiola has just won it,” one Twitter account wrote.

Noticing that she was faced away from the action, perhaps attempting to hear herself think above what was described as “the loudest noise I’ve ever heard in a football stadium” by one of her colleagues, the Fehervar veteran gave her the scare of her life by slamming on said item.

The loudest noise I’ve ever heard in a football stadium.

527 – Attila Fiola’s opener for Hungary was the first time France had conceded in six matches in all competitions, ending a run of 527 minutes of play without shipping a goal. Shock. #EURO2020 #HUN #FRA #HUNFRA pic.twitter.com/W13NEdCw15

Didier Deschamps furious with the development, this was the first time his men had conceded in 527 minutes of competitive football, and France now have a mountain to climb in the second half. 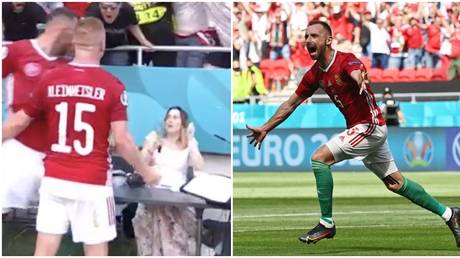