‘Casual racism’: Fans mystified as Mayweather demands no one black should dare to criticize ex-NBA star Robinson over boxing farce

‘Casual racism’: Fans mystified as Mayweather demands no one black should dare to criticize ex-NBA star Robinson over boxing farce

Floyd Mayweather has been accused of telling someone else to post a bizarre rant on his Instagram account in support of Nate Robinson, insisting that “no black athletes or entertainers” can criticize his disastrous boxing debut.

Former pound-for-pound number one Mayweather chose to bring race into a row over Robinson’s farcical boxing debut at the weekend, when the ex-NBA star was pummeled by YouTuber Jake Paul before being violently knocked out in a fiasco that left many viewers fearing for his health.

Fighting on the undercard of the hotly-anticipated meeting between Mike Tyson and Roy Jones Jr, Robinson had boldly claimed that he had made “awesome progress” and spoken brashly about the beating he expected to deliver in his first professional fight.

That bravado looked ridiculous as the veteran showed few pugilistic skills, ending up face-down on the canvas thanks to a shuddering knockout punch that raised questions about the ease with which celebrities appear to be granted licenses to compete in a notoriously dangerous sport.

In no way, shape or form is this a race thing. Crazy how everything goes that way now

Having spent the rest of the weekend enduring widespread criticism and mockery, Robinson received a racially-intoned show of support from an unlikely source as undefeated Mayweather posted a photo of the pair together on his vastly-followed Instagram account.

“Nate, I’m proud of you and I will always stand behind all of my brothers,” Mayweather announced. “I will never kick my brother when he’s down.

“It’s OK for people to voice their opinions on social media but no black athletes or black entertainers, especially black NBA players, should make a mockery out of you.

“We are supposed to all stand with each other through the good, bad and ugly. I’m here to uplift you and let you know we all love you and congratulate you for just making an effort.”

So if he was white or any other non black race it would be ok to make fun of him for Floyd.

In a sidenote that seemed to anticipate the backlash his curious outburst had invited, Mayweather added: “The times I’ve had issues with another brother is when they came at me first. I was just defending myself.”

Washington Wizards guard Bradley Beal was among the NBA players to laugh at Robinson’s expense on the night, although much of the mockery directed at him seemed par for the course for any fighter dealing in smack talk before being humiliated in the ring.

Mayweather’s newfound empathy seemed all the more surprising given his own propensity to trade insults with rivals before and after fights, most recently describing Paul and his brother, Logan, as “YouTube girls” while calling former victim and ex-UFC champion Conor McGregor as a “b*tch”.

“In no way, shape or form is this a race thing,” one reader told McGregor, while hundreds of other replies asked whether the post, which did not appear to have been written in Mayweather’s characteristic style, was his own work. “Crazy how everything goes that way now.”

Who wrote that for yo slow ass??? pic.twitter.com/ieDag3i5m6

Some readers said Mayweather was hypocritical because of his perceived lack of solidarity with black people over a controversy involving Gucci last year, when the fashion giant was at the center of a boycott over an $890 jumper that was construed to have portrayed a racist image.

“I’m not a follower,” he told TMZ while shopping at a store after showing his support for the under-fire brand by posing in its clothing on Instagram.

“You know when everybody else, they say: ‘Everybody gonna boycott?’ I say, ‘guess what? This boy’s going to get on a yacht and live life.'”

“ I’m one of the best athletes to ever live “ “ I’m a monster “ “ ima let my hands do the talking “ gets knocked out in the 2nd round. He looked like a crackhead in the ring

I mean Nate is an athletic FREAK of nature but apparently even he didn’t realize, as an athlete if you DON’T train for a sport you’re going to have a hard time beating someone who DOES train for that sport.

Black or White, I’m laughing at anyone who face plants like that.

One of the high-profile boycotters, rapper 50 Cent, publicly clashed with Mayweather over his response to the scandal, telling him to “get the f*ck out of here, champ.”

Gucci apologized over the item, writing in a statement: “We are fully committed to increasing diversity throughout our organisation and turning this incident into a powerful learning moment for the Gucci team and beyond.”

Robinson has reassured fans over his health and thanked a range of figures on Instagram since his resounding defeat, including Mayweather and two-time NBA champion Malik Rose.

“Great souls are grown through storms of struggles and seasons of suffering,” he wrote alongside a motivational video that was viewed more than 1.3 million times within less than 24 hours.

“I’m thankful for the opportunity to fight on the biggest stage there has ever been. I need to thank all my brothers for the support.

“There are too many to name. It means the world and we’re going to come back even better.” 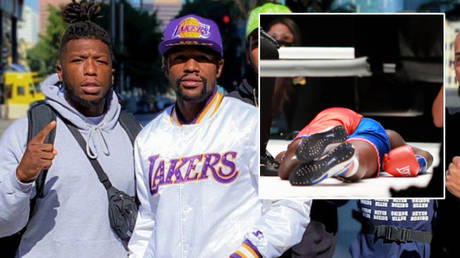