Excitement has been building among Newcastle supporters ahead of their first match since a Saudi-backed consortium took over the club, but the occasion has also seen protests at the new owners from the Middle East.

Newcastle take on Tottenham Hotspur at St. James’ Park in a Premier League meeting on Sunday with the north-east club’s home set to be packed out.

The match will be the first for the Geordie faithful since they bid farewell to widely reviled owner Mike Ashley earlier this month when his £305 million ($420 million) sale of the club to a consortium financed by the Saudi Public Investment Fund (PIF) was finally approved by the Premier League.

New Saudi non-executive chairman Yasir al-Rumayyan was seen at the stadium ahead of the game as he runs his eye over the club he will have a large say in running alongside UK stakeholders Amanda Staveley – who was the face of the bid – and Jamie Reuben, who is part of a family of billionaire British property tycoons.

But while Magpies fans were seen decked out in Saudi-themed garb in scenes of celebration, there were also protests from those unhappy at the takeover.

As promised by activists, a large poster van featuring an image of murdered Saudi dissident journalist Jamal Khashoggi was driven outside the club’s stadium.

Organizer Blair McDougall, who helped crowdfund the initiative, took aim on Twitter at Saudi Crown Prince Mohammed bin Salman – who has been accused by some of sanctioning Khashoggi’s murder in Istanbul in 2018.

Our poster outside St James’ Park ahead of the first game under their new ownership. Thanks to everyone who gave to the crowdfunded to make this happen and help ensure that MBS cannot sportswash away human rights abuses. #justiceforjamal pic.twitter.com/pGzysPLrWT

“Our poster outside St James’ Park ahead of the first game under their new ownership,” wrote McDougall.

“Thanks to everyone who gave to the crowdfunded to make this happen and help ensure that MBS cannot sportswash away human rights abuses.”

The activist also promised that there would be a plane flying overhead with a similar message around kick-off at 16:30 local time.

A Jamal Khashoggi poster is driven by St James’ Park. One Saudi here who saw it told me it’s “fake news” without being able to say what wasn’t true pic.twitter.com/HrkijlRz6s

“We’re Saudis we can afford anything” pic.twitter.com/C5HZBOJeCF

Newcastle fans have largely greeted the news of the takeover with joy as their club was propelled to unimaginable riches almost overnight after the PIF took the reins with its financial firepower estimated to be in the hundreds of billions of dollars.

The departure of Ashley after a 14-year reign of mediocrity and misery was also treated with glee, after the British retail magnate was accused of neglecting the club and turning it into a tacky shop window for his sportswear empire.

However, critics have pointed to the Saudis’ human rights record and claimed that the Premier League should not be giving the green light to regimes taking over important cultural and sporting assets.

After a saga dragging on for more than 18 months, Premier League officials were apparently satisfied by assurances that the Saudi state would not be directly involving in running Newcastle, while Riyadh has also settled a long-running piracy dispute with regional rivals Qatar regarding illegal broadcasts of Premier League matches.

Newcastle’s 19 rivals in England’s top league are said to have demanded an emergency meeting over the Saudi takeover due to their concerns, although many observers will point to the fact that the UK already widely does business with the Middle Eastern kingdom, and that wealthy patrons from the likes of Abu Dhabi have already been allowed into the Premier League.

Many fans had been expecting struggling Newcastle manager Steve Bruce to be relieved of his duties before the match, but he was handed the chance to oversee his 1,000th career match as a coach.

Change, however, will be expected sooner rather than later as the newly-rich club set out their spending plans under the Saudi leadership. 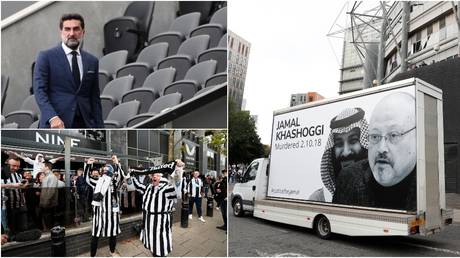 ‘Disgraceful’: Fans hit out at Son...