Former MMA star Gina Carano, star of the Disney series “The Mandalorian”, is facing calls for her to be sacked from the television show after she promoted a series of anti-facemask memes on her social media profile.

Carano, who is featured heavily in Disney’s Star Wars spinoff, also came under fire for supporting Donald Trump’s debunked claims of widespread voter fraud in the recent U.S. presidential election in addition to posts in which she opposed the widespread usage of facemasks to help curb the spread of COVID-19.

“We need to clean up the election process so we are not left feeling the way we do today,” Carano wrote soon after the election.

“Put laws in place that protect us against voter fraud.

We need to clean up the election process so we are not left feeling the way we do today.
Put laws in place that protect us against voter fraud.
Investigate every state.
Film the counting.
Flush out the fake votes.
Require ID.
Make Voter Fraud end in 2020.
Fix the system. 🇺🇸

“In a world where everyone wears a mask, it’s a privilege to see a soul,” read one message posted to her profile, while another said without evidence that “Democratic Government Leaders now recommends [sic] we all wear blindfolds along with masks so we can’t see what’s really going on.”

Carano’s outspoken comments haven’t gone down particularly well with the cross-section of fans of the critically-acclaimed “The Mandalorian” show.

The hashtag #FireGinaCarano has gained momentum online this week, with several people calling on Disney to fire Carano for her outspoken comments.

Fuck now I have to watch @themandalorian with the knowledge that Gina Carano is a Trumpy nut, a transphobe, and an anti masker?? Can ya just #FireGinaCarano , Disney? pic.twitter.com/DzUNc78kpX

“You know I really liked [your] character in The Mandalorian but because of you I don’t think I’ll be able to enjoy it anymore. Ruined it,” said another.

Carano is credited with being the first true star in women’s mixed martial arts after she rose to prominence in a brief professional career, mostly for EliteXC and Strikeforce, between 2006 and 2009.

She retired from the sport soon after the first loss of her career against Cris Cyborg in 2009, stepping away from the cage with a 7-1 pro record.

She soon parlayed her fight career for one on the silver screen with appearances in Steven Soderbergh’s “Haywire” and was also cast in the hit 2016 movie “Deadpool”.

Carano contemplated a return to mixed martial arts in 2014 to fight then UFC champ Ronda Rousey but Dana White announced in October of that year that talks had stalled.

Now aged 38, it is likely that her athletic career is behind her. And, judging by the reactions of some fans to her outspoken social media views, it seems that more than a few people also want her television career to be a thing of the past. 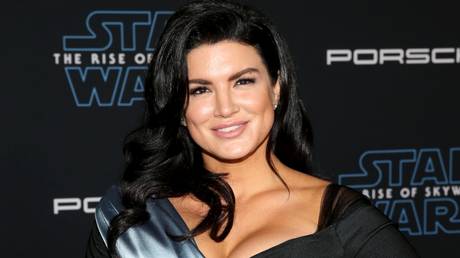