After overcoming a huge weight disadvantage to batter countryman Alexander Emelianenko during a one-sided scrap in July, Russian MMA heavyweight Magomed Ismailov has urged his victim to finally end his long post-fight silence.

Having been prolific to the point of posting a pre-fight clip from his dressing room before the pair clashed at Absolute Championship Akhmat (AKA) 107 on July 24, veteran Emelianenko has posted nothing to his Instagram following of more than 1.1 million for almost two months.

The three-time Russian national Combat Sambo’s solitary insight on his platform since his defeat, which was dubbed “David vs Goliath” because of his near-50lbs weight advantage, was a sponsorship endorsement in mid-August.

Now Ismailov has told Emelianenko, who has endured a string of high-profile personal problems during his career, that he wants an update on his wellbeing as the bruising third-round knockout fades into MMA history.

The man who stepped up from middleweight for the showdown in Sochi began by playfully referencing Emelianenko’s pre-fight jibe about his lack of hair on social media.

“Whatever happens between us, it is almost impossible to cope with the desire to stroke my bald head,” he observed, sharing a photo of the pair in which Emelianenko placed his hand on his head.

“If I don’t find out in the near future that Sasha [Emelianenko] is doing well, I’ll have to take matters into my own hands.

“In fact, I hope to find out that everything is fine there and not up to me at all.”

Known as “The Grim Reaper”, Emelianenko had threatened to “extinguish” Ismailov in the fight, only to suffer a broken nose and end up in hospital following a bloody beating.

The hugely experienced 39-year-old had claimed that “everything passes and this will pass” after his defeat, and Ismailov had declared that his opponent wanted a rematch that he was willing to grant him.

Ismailov could be particularly concerned because of Emelianenko’s troubled past, which includes various stints in jail.

Fans praised the generosity of spirit shown by Ismailov, who is on an 11-fight unbeaten streak stretching back six-and-a-half years.

“I was rooting for Sasha because I did not believe at all that [you] would win,” admitted one.

“This created a kind of disappointment and anger towards Magomed, but then he makes you love and respect him.

“This always happens – the new hero angers you at first and then you start to love him. This is our role as fans.”

Ismailov had hinted that the win would signal his own career winding down.

“I don’t like that the referee didn’t stop the fight in the first round,” he added at the time. “It seemed to me it was already time to stop it.” 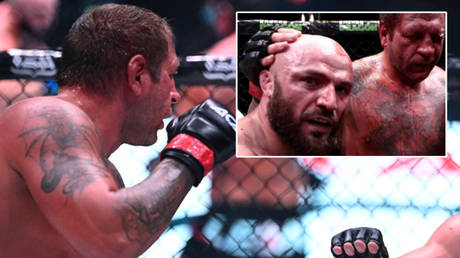