Bye bye Bailey: Man behind NHL lion mascot accused of SEXUAL MISCONDUCT is FIRED amid lawsuit for more than $1MN in damages

Bye bye Bailey: Man behind NHL lion mascot accused of SEXUAL MISCONDUCT is FIRED amid lawsuit for more than $1MN in damages

NHL’s Los Angeles Kings have dismissed a long-serving employee who played Bailey, their lion mascot at the center of allegations of sexual misconduct including making lewd comments and thrusting his hips in a woman’s face.

Tim Smith, who was suspended by the Kings last month after he was reportedly accused of waving his crotch in a woman’s face in the mascot locker room and leering at her breasts and behind, has now been axed by the Western Conference team.

The Kings terminated Smith’s contract following an investigation into his conduct as part of their “Ice Crew” group of in-game performers, who have regularly entertained crowds of more than 18,000 people at hockey games at the Staples Center.

Smith, the Kings and owners AEG are thought to be facing a lawsuit from a woman, using the alias Jane Doe to protect her identity, for more than $1 million in damages.

He is said to have had his colleague fired after she informed him that his alleged advances were unwanted, then continued harassing her in the locker room when she was reinstated, including a crotch thrust.

He had previously been accused of sexual misconduct in a separate lawsuit filed in 2017, alleging that he groped a man’s buttocks in an elevator at the center.

Bailey’s normally-prolific Twitter and Instagram accounts, which have a combined following of more than 124,000, have both fallen silent since mid-August.

The official page for the lion on the team’s website, which used to offer details of a variety of promotional and meet-and-greet opportunities alongside a form naming Smith as the key contact, now only shows a banner of the mascot above a blank page.

A popular character and figurehead of the Kings’ community work, Bailey had taken fans on rides across the ice, appeared in the colors of the LA Lakers while offering exuberant support to the NBA team and made trips in costume to the Grand Canyon National Park.

Smith was listed as the team’s senior manager of game presentation and events, having worked for the team since 2007, according to his LinkedIn profile.

His CV on the networking site said that he had held previous roles at sports teams including American Hockey League outfit the Chicago Wolves and now-defunct American football team the Indiana Firebirds.

A statement from the Kings said: “We are not in a position to provide further details or comments on this matter due to pending litigation.” 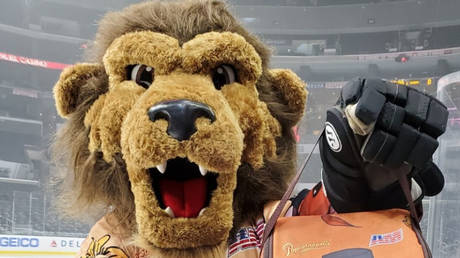