By showcasing their wokeness and pandering to Naomi Osaka’s one-woman strike, tennis bosses have set a dangerous precedent

By showcasing their wokeness and pandering to Naomi Osaka’s one-woman strike, tennis bosses have set a dangerous precedent

Desperate to display their woke credentials, tennis bosses at the Western and Southern Open in the US have set a dangerous – if altogether predictable – precedent by pandering to the social justice whims of Naomi Osaka.

Osaka announced on Thursday that she would, after all, be playing her semifinal against Belgium’s Elise Mertens in New York this week. The two-time Grand Slam winner had earlier withdrawn from the tournament as a show of solidarity with the protests that followed the police shooting of African-American man Jacob Blake in Kenosha, Wisconsin.

“Before I am an athlete, I am a black woman. And as a black woman I feel as though there are much more important matters at hand that need immediate attention rather than watching me play tennis,” explained Osaka, who was born in Japan to a Japanese mother and a Haitian father, but was brought up in the US.

“I don’t expect anything drastic to happen with me not playing but if I can get a conversation started in a majority white sport I consider that a step in the right direction,” she added.

“Watching the continued genocide of black people at the hand of police is making me sick to my stomach. I’m exhausted of having a new hashtag pop up every few days and I’m extremely tired of having this conversation over and over again. When will it ever be enough?”

The fawning over 22-year-old Osaka’s solo stand against injustice was not long in coming. “In the shadows of Ashe Stadium, Naomi Osaka personifies Arthur’s words. She leads, both tours follow… No play for anyone tomorrow. Semifinals on Friday. Finals on Saturday,” read a gushing tweet from ESPN host Chris McKendry.

In the shadows of Ashe Stadium, ⁦@naomiosaka⁩ personifies Arthur’s words. She leads, both tours follow. ⁦@CincyTennis⁩ is postponed. No play for anyone tomorrow. Semifinals on Friday. Finals on Saturday. pic.twitter.com/Igvsqz18UY

As McKendry noted, tennis bosses were indeed quick to dance to Osaka’s tune. Play was paused for all matches – men’s and women’s – at the Flushing Meadows tournament. Backed into a corner, and desperate to signal their own virtues, US Tennis Association (USTA) released a joint statement with the ATP and WTA, explaining that “as a sport, tennis is collectively taking a stance against racial inequality and social injustice that once again has been thrust to the forefront in the United States.”

Like it or lump it, everyone else in New York had to down rackets for an enforced show of solidarity with the protests at US police brutality. No matter that the organizers had absolutely nothing to do with the shooting of Jacob Blake, let alone the international assortment of players at the event – including Osaka’s semifinal opponent Mertens, who seemed set for the tournament final by default.

But as it turned out, Mertens did not have a walkover. Instead, Osaka swiftly changed her mind and ended her short-lived protest, saying in a statement on Thursday that she would be taking to the court on Friday.

“I pulled out of the tournament yesterday in support of racial injustice and continued police violence. I was (and am) ready and prepared to concede the match to my opponent,”  said the former world number one.

“However, after my announcement and lengthy consultation with the WTA and USTA, I have agreed at their request to play on Friday. They offered to postpone all matches until Friday and in my mind that brings more attention to the movement. I want to thank the WTA and the tournament for their support.”

Setting aside the flawed logic of just how much attention the most fleeting of boycotts brings to the movement against racism, tennis organizers have now set a dangerous yet all-too-predictable precedent by allowing stars such as Osaka to dictate terms to them. Not only had organizers suspended all matches after her withdrawal, they were now allowing Osaka to unilaterally reinsert herself back into the draw – and to hell with the disruption it caused for anyone else.

Many fellow players no doubt supported Osaka. But what of those with other social justice causes to champion? If, for example, Novak Djokovic wanted to draw attention to the treatment of the Serbs in Kosovo, or a Muslim player wanted to protest the treatment of the Uighurs in China? It’s not hard to imagine how that would go down – after all, they are among the myriad causes currently much further from the pages of the Western press.

Tennis bosses at an international event have now shown they are willing to mollify their stars over domestic injustices. But where do they draw the line? Not only that, but what happens to players who want to break the picket lines and refuse to strike? They will surely risk being canceled by the social justice brigade, or simply shamed into toeing the line.

Sports stars such as Osaka – who banked $37.4 million in the past year alone, smashing the record for a female athlete – are also in the envious position of being able to strike without fear of dire financial consequences. The same goes for the NBA players who initiated the wave of no-shows. By a recent count, the average salary in the league is $7.7 million. They may be the most socially active athletes in the world, but they are also the most handsomely rewarded. How many of us could realistically afford not to turn up at work, citing one protest cause or another?

Osaka has every right to withdraw from any tournament she chooses, and she clearly feels strongly about the BLM cause. But organizers should not fall over themselves to accommodate stars championing one cause célèbre or other. By jumping on the bandwagon, they are riding roughshod over the interests of many others, merely in a desperate attempt to play catch-up and prove how much they care.

That the WTA and ATP responded in this way was, however, entirely predictable. We operate in a world where sports and those who practice them are locked in an escalating battle to display just how much they care about particular causes. Taking a knee is not enough, wearing a T-shirt is not enough. Pausing matches is not enough. Entire tournaments now have to be suspended, or potentially entire seasons.

Champions of the cause will say that this is the whole point, that the message is finally being hammered home, that pressure will be applied to the powers that be and to the cops on the streets meting out all that racial injustice. Rioting on the streets of America and cities aflame did not get the message across, but boycotting sports for a whole day will somehow do the trick.

But sports officials must not allow themselves to be further swept away. They must not allow high-profile stars – however well-meaning – to enforce blanket suspensions on those lower down the pecking order. There are plenty on the men’s and women’s tennis tours who scrimp and save as they fly around the world on the circuit. The Covid-19 pandemic has already jeopardized their income. Now they face the threat of entire tournaments being scrapped to pacify proponents of causes that they may have little – if anything – to do with. Foisting strikes and protests on them is simply unfair.

The tennis hierarchy will pat themselves on the backs with their right-on reaction to Osaka’s decision, but anyone not aligned with this particular cause should be wary – they could be increasingly forced to watch on from the sidelines, and in some cases suffer through no choice or fault of their own. 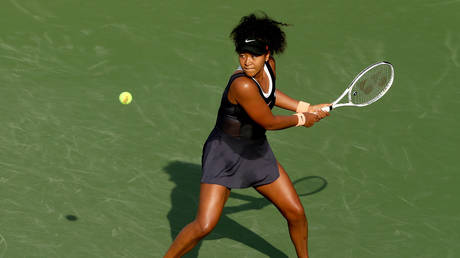 Portugal could go BACK on quaranti...