Jake Hepple, the Burnley supporter who claimed responsibility for flying a ‘White Lives Matter’ banner above a Premier League game on Monday, has reportedly been fired from his job as a welder amid outrage at stunt.

Hepple caused a stir by arranging for the banner to flown above the stadium at kick-off of Monday’s 5-0 reverse to Manchester City, in a move clearly designed to act as a counter to the spate of ‘Black Lives Matter’ protests which have been commonplace at Premier League grounds since the English season was restarted last week.

The stunt was immediately condemned by both the club as well as the team’s skipper Ben Mee, who admitted in a post-match interview that he was “ashamed” at the move.

That was an opinion apparently shared by Hepple’s employer Paradigm Precision, who have reportedly relieved him of his duties, saying in a statement that they “do not condone or tolerate racism in any form.”

Hepple, though, has stated that he didn’t intend the banner to be perceived as xenophobic.

“I’m not racist. I know people are trying to make out to be one but I’m not. I’ve got lots of black and Asian friends and this banner was actually inspired by the Black Lives Movement,” Hepple insisted to the Daily Mail.

“We were not trying to offend the movement or black people. I believe that it’s also important to acknowledge that white lives matter too. That’s all we were trying to say.

“My employer, the club and so many other people have completely overreacted to what’s happened.”

Incredibly, Hepple’s girlfriend Megan Rambadt has also been dismissed from her job at Solace Foot Health and Reflexology after allegedly posting racist messages to social media.

“It was brought to our attention that one of our employees has been publicly posting and tweeting comments of an abhorrently racist nature,” they said.

“It came as quite a shock to us as the lady in question has never shown, insinuated or acted in any way that would suggest she could have such feelings and beliefs…

“We would like to thank the person who brought these comments to our attention and assure you that we will deal with this situation internally.”

They added that they had discussed the matter with Rambadt and offered to pay for Racial Sensitivity training but following those discussions it was determined that her employment should immediately be ended.

Burnley, meanwhile, have indicated that Hepple will be banned from attending games at Turf Moor for the rest of his life, while the Lancashire Police have confirmed that they don’t intend to launch criminal proceedings against him.

“After assessing all the information available surrounding this incident we have concluded that there are no criminal offences that have been disclosed at this time,” the police said. 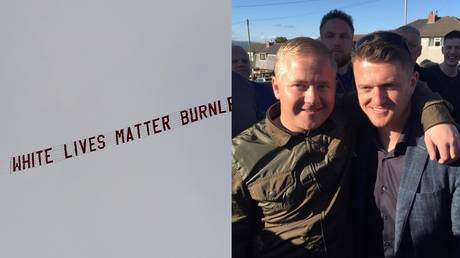