Setien, who was appointed as Ernesto Valverde’s successor in January, had a tumultuous spell in the charge of the Catalan giants, which his position mired almost immediately by reports that many of the first team playing squad were unconvinced by his leadership.

The situation at the club degenerated post-lockdown, as Barca surrendered their La Liga crown to rivals Real Madrid and then suffered the historic Champions League reverse to Bayern Munich

The manner of the club’s exit from Europe seemed to seal Setien’s fate as the club’s under-fire president Josep Maria Bartomeu, apparently eager to address the club’s flaws ahead of campaigning for re-election to his position next year, finally withdrew his backing for his beleaguered coach.

“Quique Setién no longer first team coach,” the club announced in a statement. “The new coach will be announced in the coming days as part of a wide ranging restructuring of the first team.

The current wave of discontent as the Camp Nou has led to furious speculation that Lionel Messi has demanded to leave the club this summer, with speculation suggesting the Argentinian maestro is eyeing a reunion with former boss Pep Guardiola at Manchester City, or even with former teammate Neymar at Paris Saint-Germain.

It feels like yesterday when whole of the fanbase got overjoyed over the sacking of Valverde and expected Setien will bring some changes along quite a rocky path ahead. In the end under various circumstances, Setien drifted away from his words and the rest is
Thank you Setien GL https://t.co/3Dx03ZF7ue

Goodbye Quique Setien.
Sorry that your dreams turned into a nightmare within the twinkle of an eye.

Maybe in a different time and under a different circumstance, things might have gone completely differently.

Most of us know that you were a pawn in all of this. All the best 👏🏽

He’s the least at fault. He was just the scapegoat. Bartomeu & half of the players should be gone. Setien is actually a great coach if you’ve seen what he’s done before. You can’t do nothing with these aging players & incompetent board🤦🏽‍♂️ https://t.co/nFg0AsscS7

The move concludes Setien’s turbulent eight-month spell with the Spanish giants, and he now becomes the first Barca boss since Radomir Antic in 2003 to leave the club without securing any silverware in his time in charge.

As for who will step into the Camp Nou dugout next, reports from Spanish media suggest that the club’s former player Ronald Koeman is set to be appointed as Setien’s replacement, beating out fellow candidates Mauricio Pochettino, Xavi and Laurent Blanc for the coveted, but demanding, job. 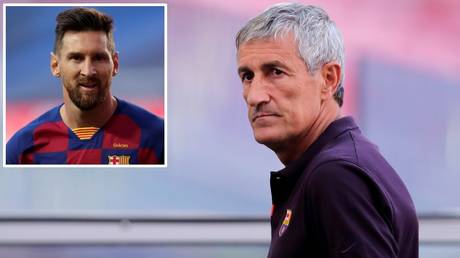