State health officials have advised a hotly-anticipated Brazilian derby match be canceled after one of the two clubs reported 14 positive coronavirus cases ahead of the match.

Brazilian football authorities followed the advice of state health officials to call off the match between Avai and Chapecoense, with one of the clubs suffering a major COVID-19 outbreak within their staff.

The match was called off less than 24 hours before it was due to kick off in the Santa Catalina state championship, which restarted on July 8 with Chapecoense’s 2-0 win over Avai forming one of four matches played as the action resumed.

But the return match was scrapped after the state’s Health Secretariat ordered the league to call off the fixture, which was due to kick off at 4pm local time on Sunday.

“One of the teams had 14 confirmed cases of COVID-19 and it is necessary for all the players to follow the necessary protective measures,” the league said in a statement.

It was not explicitly stated which of the two clubs had produced 14 positive COVID-19 tests, but Brazilian sports outlet globesporte.com reported that it was Chapecoense.

Brazil currently has the highest number of coronavirus deaths in the world, with more than 71,000 confirmed fatalities due to COVID-19, a total that is second only to that of the United States. 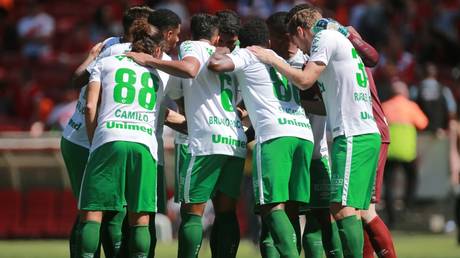 China set to fall short on US ener...