Former Brazil and Barcelona star Ronaldinho will stay under house arrest in a hotel in Paraguayan capital Asuncion after a court reportedly rejected his latest appeal in a case involving claims he used a fake passport.

The World Cup winner, 40, was detained along with his brother back in March after they supposedly entered the country using fake documents.

The pair spent 32 days in a prison just outside Asuncion before being granted a transfer to house arrest in April, taking up residence in a four-star hotel in the capital.

However, any hopes of an early release from those more luxurious environs suffered a blow when the former Ballon d’Or winner’s latest appeal in the case was rejected on Friday, according to Globo.

In recent days the former Barcelona star spoke of spending “sixty long days” under guard at the hotel and compared the situation to people quarantining at home during the coronavirus outbreak, but now it seems as though he may well have to extend his stay.

“People in their homes must imagine what it must be like not being able to do what you are used to,” the 2002 World Cup winner told Spanish publication Mundo Deportivo.

“I think that is something that will remain with us all forever after living in this complicated experience. I hope that soon everything will return to normal and we can return to our homes. Hopefully everything will be as before.”

Ronaldinho, along with his brother Roberto Assis, were originally arrested in March after reportedly accepting an invitation to the country from a local casino owner.

It had appeared a deal to secure the pair’s release had been struck before a judge threw out a prosecutor’s deal which would have seen the two men walk free, most likely after paying a charitable donation.

It has also been reported that the player was facing the potential of six months in prison if prosecuted to the fullest extent of the law.

The former Barcelona forward’s time in detention has not been without incident, as he turned 40 behind bars and took part in a prison football tournament.

On his eventual release, Argentine legend Diego Maradona has reportedly offered him a path back into football at Gimnasia y Esgrima La Plata, the club he manages in his homeland. 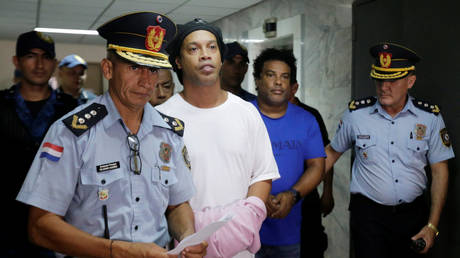 Lights out: NASCAR drivers trade b...