A trio of Zenit St.Petersburg players and staff have been hailed for saving an unconscious man’s life after realizing that he was trapped inside of a burning building during the team’s recent training camp in Turkey.

As reported by Zenit’s own press service as well as the TASS news agency, three staff members at the Russian club ran into an inferno to rescue an unnamed man who had reportedly fallen into unconsciousness after becoming trapped amid the flames.

Two players and one coach – Islam Zhilov, Nikita Simdyankin and Luis Anula respectively – became aware of a commotion inside of a burning utility room at the Turkish training base on Sunday.

After being alerted to the situation by screams, the three burst into action. Anula helped extinguish the blaze with the help of a nearby fire extinguisher while the two players, Zhilov and Simdyankin, dragged the man from the building to safety.

All three, who represent Zenit’s “farm club” Zenit-2 St. Petersburg, have been hailed for their heroics after it was confirmed that the man was saved and his injuries were not serious.

“Yesterday at the training camp there was an incident that we cannot but tell: Islam Zhilov, Nikita Simdyankin and Luis Anula committed a real man’s act,” the club wrote on Twitter, via translation.

“While jogging, they heard screams, ran up and saw smoke – there was a fire in one of the back rooms. While Luis was using a fire extinguisher to get rid of the flames, the guys dragged the unconscious worker into the air and called an ambulance.

“Now the victim has come to his senses, nothing threatens his life. Bravo, guys!“ 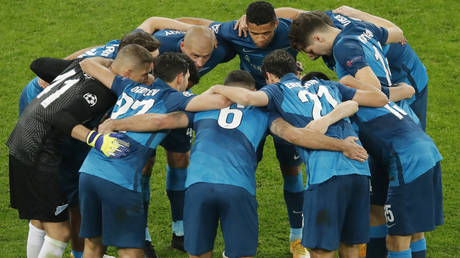