The NBA has announced that the playoffs will resume on Saturday after an accord was struck with the league’s players’ union which will see the establishment of a ‘social justice coalition’ designed to tackle inequality.

The agreement comes amid widespread protest following the shooting of African-American man Jacob Blake by police last week and follows the spate of ‘Black Lives Matter’ protests which engulfed many major sports – and in particular the NBA – in recent months.

A tense meeting between representatives of the remaining playoff teams was ended when the game’s most well-known player, LeBron James, left a meeting in which teams were coordinating a response to the latest in a series of violent incidents between law enforcement and members of the United States’ African-American community.

James was followed out of the meeting by his Los Angeles Lakers teammates and representatives of the Los Angeles Clippers. Previously, the Milwaukee Bucks announced that they were ‘boycotting’ their playoff game against the Orlando Magic in protest against Blake’s shooting.

Terms of the agreement announced on Friday state that the league will allow team arenas to used as venues to vote in the upcoming elections on November 3 in addition to the formation of a ‘social justice coalition’.

Additionally, a wave of advertising promoting voting rights will appear throughout broadcasts of the recommenced playoff games. 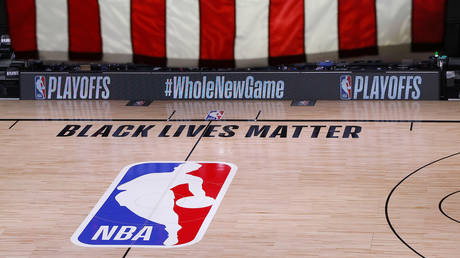