US boxer Mikaela Mayer extended her unbeaten pro record to 13-0 at the MGM Grand on Tuesday and the blonde bombshell has set her sights on becoming world champion, which could mean facing lingerie queen Ewa Brodnicka.

In a performance that was watched by NBA Hall of Famer Magic Johnson, Mayer moved to thirteen straight victories with a shutout, unanimous 10-round decision victory over US-based Nigerian Joseph at The Bubble in Las Vegas.

The fight had become the headline bout when men’s WBO super featherweight champion Jamel Herring tested positive for Covid-19 which put paid to his title defence with Jonathan Oquendo and this bumping chief support Mayer and Joseph up the card.

Despite that particular feat being achieved in admittedly undesired circumstances, Mayer said: “[Tuesday night], we were able to shine a light on women’s boxing.”

“It’s not the way we wanted it to happen, but at the same time it’s proof that patience leads to opportunity. It was a long time coming for me to finally headline a show. I’ve worked so hard to get her but would only get little pieces of exposure,” she said, Boxing Scene reported.

The super featherweight has now set her sights on the major belt holders in the division, which includes Poland’s WBO champion and eccentric Ewa Brodnicka, who also boasts an unbeaten slate of 19-0, including five victorious world title fights.

Bold Brodnicka has made a name for herself as a maverick and an extrovert, wearing lingerie made from leather straps bound around her body to weigh ins and kissing her opponents on the lips as a form of mind games.

According to Mayer, Brodnicka admitted in her most recent post-fight interview after her win over Djemilla Gontaruk that she was keen on fighting the American, to which Mayer obliged, only for the potential fight to suffer a postponement.

Mayer is a former Olympian who boxed for the United States at the 2016 Rio Summer Olympics, where she was defeated in the second round by eventual bronze medalist, Russian Anastasia Belyakova.

Another possible option for the LA native would be to move north of super featherweight to challenge Ireland’s double Olympic gold medalist Katie Taylor for the undisputed lightweight championship. Either way, Mayer is chomping at the bit for a title shot.

“Top Rank signed me—the first woman ever they signed to a promotional contract—and developed my career, but then we hit a point where I couldn’t get the world title shot I was supposed to get,” she said after her victory on Tuesday.

“I feel like I always get one foot in the door but then it’s one toe out. But I just stayed confident that something like this would happen. Everything came along at the perfect time.”

A fight between Mayer and Brodnicka would surely be an attractive meeting and would be worth watching simply for the weigh-in alone. 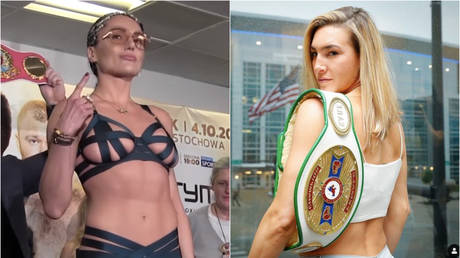