The Paris Saint-Germain star was evidently delighted to share a pitch with the Juventus forward, as he revealed after the match on social media with a picture of the pair during the game.

Several of his Les Bleus teammates also posted pictures of themselves alongside Ronaldo on social media following the match.

Mbappe and Ronaldo were also seen having a warm conversation during the game.

After Mbappe posted the picture with him alongside the “idol” comment, those who prefer Barcelona star Messi were quick to share their thoughts.

One fan described both Mbappe and Ronaldo as “overrated tap-in merchants,” while another said: “Messi is GOAT and [Callum Hudson-Odoi] is better than Mbappe. Don’t @ me.”

both overrated tap in merchants

A particularly passionate Messi supporter suggested the reason the Frenchman thinks so highly of the Portuguese is because he can’t reach Messi’s level.

“You idolise people you can be like!” he wrote. “Messi’s talents are abnormal, God wanted to watch football so he sent Messi, Mbappe knows with hardwork and dedication he can be like Ronaldo that’s why Ronaldo is his idol. You can’t be like Messi unless God gives you Messi’s talents.”

You idolise people you can be like!
Messi’s talents are abnormal, God wanted to watch football so he sent Messi, Mbappe knows with hardwork and dedication he can be like Ronaldo that’s why Ronaldo is is Idol.

You can’t be like Messi unless God gives you Messi’s talents🐐🐐🐐🐐🐐 pic.twitter.com/dDo5GzNDJq

Others echoed similar sentiments, writing: “You can off course be him. Score 740 goals in 1000 games and you will be him. Just score goals and you’ll be him. Wise move that you don’t idolize Messi. That will be beyond you. Scoring over 700 goals in 850 games and 300 assists, creating and dribbling will not be possible.”

It has been well known for some time that Mbappe has idolized Ronaldo since childhood.

The 35-year-old has been considered the best in the world alongside Messi for more than a decade, with the pair collecting 11 Ballons d’Or between them over the years.

The forward has notched 742 goals and 263 assists in 1,019 games for club and country in a stellar career that includes spells with Manchester United and Real Madrid.

Messi, 33, has spent his entire club career with Barcelona, racking up a combined total of 706 goals and 326 assists in 873 games for the Catalan giants and Argentina.

With the pair both entering the twilight of their careers, Mbappe is perhaps the best-placed player to inherit their incredible mantle at the summit of the game.

The 21-year-old, who has already won the FIFA World Cup with France – something neither Ronaldo or Messi have achieved with their countries – has 134 goals and 83 assists to his name in 224 career matches. 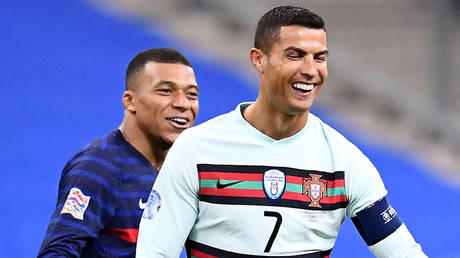