Teenage sensation Erling Haaland’s homecoming to his native Norway perhaps wasn’t as welcoming as he had envisaged, as the Borussia Dortmund superstar was ejected from a nightclub after an apparent disagreement with bouncers.

The 19-year-old Haaland has been enjoying some time off since the finish of the Bundesliga season with his Instagram feed showing the player with friends and family, but his trip home seems to have taken a turn on Saturday after footage emerged which appears to show him getting thrown out of a nightclub in a heated confrontation with security.

Haaland, who has scored an impressive 16 goals in 18 games since joining Dortmund from RB Salzburg in January, appeared as though he was on a video call in footage which was shot by a fan and published on social media platform Snapchat.

The player appears angry and confrontational in the brief clip and is seen shouting at the security guard who removed him. He is then led away from the scene.

Haaland just got kicked out of the club in Norway😂 pic.twitter.com/AKI4IwrGJS

Come on @ErlingHaaland back to work. Big city nightlife is not for you pic.twitter.com/dz8Vws7gyh

Reacting to the clip Haaland’s father Alf Inge, who represented Leeds United and Manchester City in the Premier League, joked that the “big city nightlife is not for you.”

The teenager is regarded by many as one of the brightest young footballing talents in the world and is tipped to impress when the Bundesliga resumes in what will be his first full season with the club.

Dortmund traditionally don’t keep hold of their star players for very long, with the likes of Christian Pulisic and Pierre-Emerick Aubameyang have traded Germany for the English Premier League, and numerous reports have stated that Real Madrid have placed the player on their wish-list.

Another of the team’s current young stars, England international Jadon Sancho, is another who is tipped to make a big money move to the Premier League. 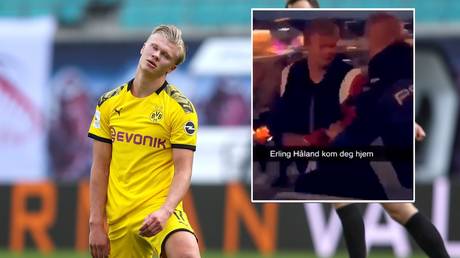