Outspoken fighters Ben Askren and Colby Covington didn’t pull their punches in their assessment of the Kamaru Usman vs. Jorge Masvidal title fight at UFC 251 as the pair criticized the fight on social media.

Former Bellator and ONE Championship welterweight champion Askren took the first pot-shot at Usman and Masvidal for their main event matchup on “UFC Fight Island,” which Usman won via unanimous decision with scores of 50-45, 50-45, 49-46.

Askren lost his unbeaten record, and a fair degree of dignity, when Masvidal knocked him out in just five seconds at UFC 239 last summer. But the now-retired fighter took aim at his former rival and UFC champ Usman with a withering six-word assessment of their title clash.

“This fight is boring as sh*t,” he tweeted.

This fight is boring as shit

Askren’s tweet was met by a mixed response, as one fan highlighted Usman’s foot stomp-heavy approach to his clinch work, as he replied, “You paid money to watch some guy step on another guy’s toes for 25 minutes.”

Another responded by reminding Askren of his fight with Masvidal, tweeting, “24 minutes and 55 seconds longer than when you fought him.”

He was joined by another fan, who offered, “Your fight with Masvidal was way better.”

Askren wasn’t alone in his criticism of the fight. The last man to face Usman, former interim champ Covington mocked the entertainment value of the action on show, tweeting, “Barn burner. Instant classic. Who could’ve seen that coming? #ufc251”

Covington received plenty of pointed replies, with one fan saying “At least he didn’t get his jaw broken.”

Another tweeted, “Guy took the fight on 6 days and still did better than you.”

While Askren is out of the picture following his retirement, Covington is very much in the mix, and is pushing hard for a rematch with Usman following their epic clash at UFC 245 last December.

Usman won the fight via fifth-round TKO stoppage in a fight that saw the champion leave Covington with a broken jaw. 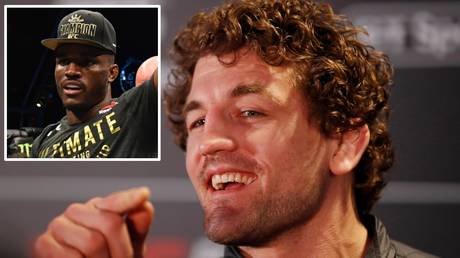