Reigning US Open champion Daniil Medvedev has become the latest tennis star to pull out of the upcoming Kremlin Cup, and joins an extensive list of absentees including female Flushing Meadows counterpart Emma Raducanu.

Fresh off his first Grand Slam win, featuring at the tournament in his homeland, which kicks off on Monday, would have been the perfect homecoming for the 25-year-old.

As confirmed via social media, however, Medvedev is feeling the effects of a chaotic year and would prefer to sit this one out.

“Hello everyone!” his statement began.

“I am really sad to announce that this year I won’t be participating in [the] Kremlin Cup. It’s always special to have a chance to play in front of Russian fans.

“I signed [up] to give myself [the best] chances to play, but with [my] calendar this year being extremely tough (in addition Indian Wells in October), I felt that my body is not 100% ready anymore.

“This decision was very tough for me but it has to be done in order to be able to finish [the] 2021 season strong!,” he concluded.

Last seen on the court crashing out of the mentioned Indian Wells last 16 on Wednesday against Grigor Dimitrov, Medvedev joins a long list of absentees for the Kremlin Cup.

Chief among them is women’s US Open champ Emma Raducanu.

But there is also American Sebastian Korda and Spain’s Pablo Andujar among the men.

The Kremlin Cup takes place at the Luzhniki Sports Palace and the Irina Viner-Usmanova Gymnastics Palace from October 18 to 24. 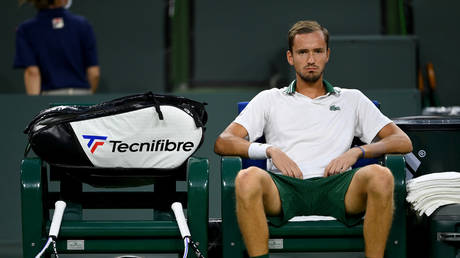 UFC Hall of Famer Sanchez ‘not...