Another mixed martial arts bombshell might just have announced herself on the scene after Mexican-American Lucero Acosta showed off some stunning striking – and a rather unique look – in a decisive win against Allysen Breeden.

Fight fans are beginning to sit up and take notice of novice fighter ‘La Loba’, who improved her record to 2-1 as she swarmed Breeden with a flurry of strikes against the cage to rebound from defeat in her last bout as part of Friday’s Combate Global ‘Mexico vs USA’ card from Miami, Florida.

Blue in her hair, implants like that, and fucks people up. She’s living right lmao.

Love to see it pic.twitter.com/srGb66Wedr

The win, and the manner in which she achieved it, signals that there could well be a new name in women’s MMA who could well be gracing both main evens and magazine covers in the future – and especially so if she can display a few more dominant wins like the one she achieved Friday.

“Blue in her hair, implants like that, and f*cks people up. She’s living right,” wrote one fight fan in response to Acosta’s handiwork in the cage, while another wrote that they “love to see it” while posting a pictures highlighting Acosta’s combination of beauty and brawn.

Despite having just three fights on her professional record as of Friday night, Acosta has already gathered a respectable social media following of more than 50,000 fans on Instagram – and that figure is expected to swell even further after she showcased her talents so effectively against Breeden.

Further challenges certainly await the fight who remains an up and comer in one of the world’s toughest sports, but it is clear that the 26-year-old has tools – and the looks – she will need to help her on her journey. 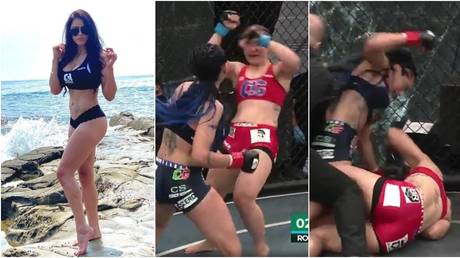