Close
Trending News
HomeSport‘Blame Djokovic… the others were only there, they didn’t kill anyone’: Thiem manager blasts world no.1 over Covid fiasco

‘Blame Djokovic… the others were only there, they didn’t kill anyone’: Thiem manager blasts world no.1 over Covid fiasco

‘Blame Djokovic… the others were only there, they didn’t kill anyone’: Thiem manager blasts world no.1 over Covid fiasco

The manager of Austrian world number three Dominic Thiem says Novak Djokovic should be the only one to apologize after his ill-fated Adria Tour collapsed following a spate of coronavirus cases.

The Serbian 17-time Grand Slam king confirmed on Tuesday that he was the latest player from his new Balkan tour to test positive for coronavirus, after spending the past fortnight mingling with fellow players on court and at nightclub parties.

The diagnosis did not come as a surprise to many after Adria Tour competitors Grigor Dimitrov, Borna Coric and Viktor Troicki all confirmed they had the illness, but the backlash against Djokovic for going ahead with the event in the first place was nonetheless ferocious.

Djokovic himself took to social media on Tuesday to apologize for the tour fiasco, saying he was “deeply sorry” for the whole affair, and now fellow participant Thiem – who has not tested positive for coronavirus – has issued an apology of his own on Instagram.

“We played without an audience for weeks, so we have been more than happy about the fans at the event,” the 26-year-old star wrote.

“We trusted the Serbian government’s corona rules, but we have been too optimistic. Our behaviour was a mistake, we acted too euphorically. I am extremely sorry.”

“I’ve now got tested five times within the last 10 days and the result was always negative. I wish everyone who is infected all the best and quick recovery,” he added.

However, Thiem’s manager Herwig Straka felt that his client should not be the one apologizing – laying the blame firmly at the feet of Djokovic.

“In hindsight it was all dumb, even if it was allowed,” Straka told Der Standard.

“Everyone knows it was dumb, no one needs a public apology. The only one who should apologize is Djokovic. He staged the whole thing. The others were only there. They didn’t kill anyone.

“You have to assign Djokovic the main share of the blame. The others participated, but he was very encouraging.

“Originally for worthy reasons, with charity as the main goal, but then it went into a completely wrong direction. It became a publicity show. You have to blame that on Djokovic.”

Djokovic continues to take flak from far and wide over his Balkan charity tour, which began in Belgrade before moving to Zadar in Croatia.

Further dates were planned in Montenegro and Bosnia and Herzegovina, as well as an exhibition match in Sarajevo, but the tour was scrapped on Sunday following the news of Bulgarian ace Dimitrov’s initial Covid-19 diagnosis.

As well a quartet of players testing positive, the pregnant wife of Serbian star Troicki has also been infected, as has Djokovic’s wife Jelena, his fitness coach and Dimitrov’s trainer.

In his apology this week, Djokovic admitted organizers were “wrong” for believing that the coast was clear to proceed with the tour despite the lingering Covid-19 threat. 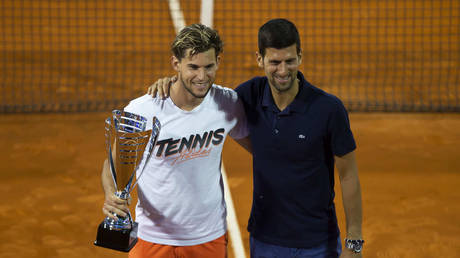