According to Russian outlet Fontanka, the would-be extortionist, the identity of whom is apparently known to both Dzyuba and law enforcement, threatened to release the intimate clip of the 32-year-old Zenit St Petersburg striker unless they received the payment.

Recordings of conversations between Dzyuba and the blackmailer have been obtained and are being reviewed by agents from the FSB, Russia’s Federal Security Service, with information reportedly being sufficient to mount a criminal case of extortion.

It is perhaps no surprise that Dzyuba may have been targeted by a person known to him. Russia’s World Cup 2018 hero earlier claimed he in fact knew his phone had been hacked and fully expected personal and potentially embarrassing videos to be circulated in public.

The video in question, in which Dzyuba is lay atop a bed topless while making sexually explicit gestures to the camera, has subsequently gone viral and has led to a media brouhaha in Russian football and further afield in the country.

Dzyuba was dropped from the Russian national team for the friendly against Moldova and their UEFA Nations League matches against Turkey and Serbia this month. Georgi Dzhikiya stepped in to fill that role in Chisinau on Thursday.

Disgruntled fans who disagreed with Dzyuba’s exclusion from the Russian side have made their feelings known and mounted a petition on online platform Change.org, which as of Friday had gathered 27,000 signatures calling for the 47-cap forward to be returned to the national team after being dropped to remove “an unwanted negative from the side”, according to manager Stanislav Cherchesov.

Former Russian presidential candidate and journalist Ksenia Sobchak also came out in support of Dzyuba, emphasizing in a social media post that the reaction to the scandal reminded her of the frosty attitude toward sex in the USSR with the expletive proverb “everybody wanks how they want”.

Her sentiment was echoed by feminist protestors in Moscow, who took to the streets with banners “everyone does it” and “not ashamed” and demanding that the country speaks more openly about sex. Quite why they chose this particular episode to highlight their plight remains unknown.

In one of the weirder shows of solidarity with Dzyuba, pilots from Russian airline Pobeda flew on a phallic route from Moscow to Ekaterinburg to make their flight path show up on sky maps as the shape of a penis. 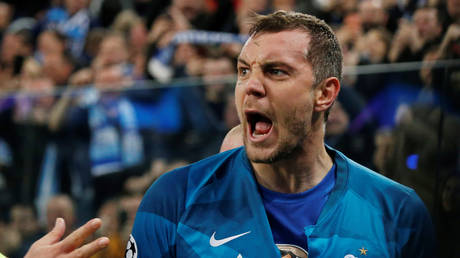