Close
Trending News
HomeSportBit too cocky? Russian pilots ‘could be disciplined’ for penis flight path stunt in support of Dzyuba

Bit too cocky? Russian pilots ‘could be disciplined’ for penis flight path stunt in support of Dzyuba

Bit too cocky? Russian pilots ‘could be disciplined’ for penis flight path stunt in support of Dzyuba

A pair of Russian pilots might be in trouble after they traced a giant penis in the sky with their flight route in apparent support of national team captain Artem Dzyuba, after an X-rated video was leaked of the football star.

Russian federal airline authorities Rosaviatsiya are investigating the phallic flight path, which was drawn by an aircraft from the Pobeda airline on Wednesday over the skies of Neftekamsk in the Republic of Bashkortostan, as the plane made its way from Moscow to Ekaterinburg.

Commenting after the image was first picked up by eagle-eyed flight trackers, a Pobeda spokesman said: “We don’t know what you might see in our aircraft’s flightpath, but probably Pobeda captains decided to express their support for Artem Dzyuba, condemning the madness around him.”

But according to Russian outlet RBK, those involved in the cheeky stunt could now face disciplinary measures after Rosaviatsiya became involved.

The 32-year-old was subsequently dropped from the national team for three upcoming matches against Moldova, Turkey and Serbia, with manager Stanislav Cherchesov stating that he wanted “to protect both the team and the player from excessive negativity and tension.”

Dzyuba, who the day after the scandal broke scored in a 3-1 victory for Zenit against Premier League rivals Krasnodar, released a video in which he admitted that he had “made mistakes” but thanked fans for their widespread support.

Many in Russia have dismissed the scandal as a fuss about nothing, including a group of female activists who took to the center of Moscow last week with slogans of support such as “everyone does it.”

In a darker turn of events, it was reported that Dzyuba had met with the hacker who stole the compromising video from his cell phone but had turned down demands for a $5 million fee not to leak the footage.

Russia’s FSB federal security service is said to be investigating the case. 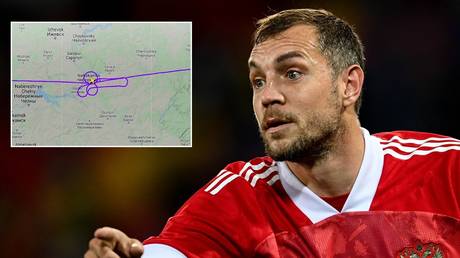