Married American actress Lust, who has starred in hundreds of adult films, was originally linked to Rodriguez when eagle-eyed fans on social media spotted that the pair had followed each other in 2018.

The former webcam model and stripper then tagged Rodriguez in a video of her twerking in a gym, although the relationship between the pair appeared to have gone quiet for more than two years before she sent him a new message to celebrate him turning 29.

“Happy birthday,” wrote Lust, who is one of only 290 accounts followed by the Colombia attacking midfielder on Twitter.

Happy birthday @jamesdrodriguez hope it was a good 🥳

“Hope it was a good party.”

Thousands of people responded to the cheeky announcement, with Lust retweeting news reports of her message and accounts that showed Rodriguez dancing with a smile on his face in response.

“Bruh, this is the biggest win of 2020,” wrote one, while others replied with photos of figures including Cristiano Ronaldo and Jose Mourinho looking shocked.

”hope it was a good” pic.twitter.com/ZEZxP0XPfp

Rodriguez did not reply publicly to Lust, but thanked his Instagram following of almost 46 million for their well wishes and said that he was missing his young son, receiving supportive replies from the likes of La Liga top scorer and Madrid teammate Karim Benzema.

She was quick to share her views on UFC 251 on Fight Island at the weekend and took part in an MMA podcast, Beauty and the Beast shortly afterwards.

Please RT .. https://t.co/ZieCygtYdk #BeautyAndTheBeast please subscribe to my podcast with my cohost @JMarquezMMA Just click on the subscribe button it’s free. This might be the sexist rear naked choke u seen #mma #ufc ask questions and i will answer on the show next week. pic.twitter.com/XM8uIcSGwF

The 41-year-old used the podcast, which she co-hosted alongside UFC middleweight Julian Marquez, to offer fans tips on how to send women direct messages on social media.

“This might be the sexist rear-naked choke you’ve ever seen,” she said, posing with Marquez in a revealing shiny dress while providing advice on why men should avoid sending explicit photos via social platforms. 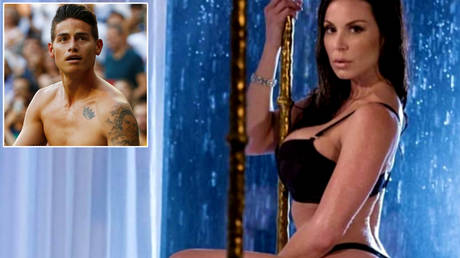 Workers could be forced to wear ma...