Boxing legend Manny Pacquiao has announced he has formally signed for Paradigm Sports, the same company who represent Conor McGregor, in what is seen as another step toward the pair meeting in the ring.

Pacquiao made the announcement on Twitter, which McGregor retweeted.

“Excited to have officially partnered with Paradigm Sports,” he wrote. “Grateful for the support of my family, team, and fans as I continue my professional boxing journey. Big things coming! Stay tuned!”

Excited to have officially partnered with @ParadigmSports 🥊👊🏼Grateful for the support of my family, team, and fans as I continue my professional boxing journey. Big things coming! Stay tuned! pic.twitter.com/bawoPAGv4H

The Filipino reportedly partnered with Paradigm back in February but it’s said his deal at the time was not “active.”

A fight between himself and McGregor has been mooted.

Last month, the UFC fighter – who fought Floyd Mayweather Jr. in a crossover into boxing in 2017 – said “it will be a true honor to have faced two of the greatest boxers of the modern era.”

Pacquiao’s aide Jayke Joson subsequently said the pair would face off in the ring in 2021.

“For the sake of all the Filipino COVID-19 victims, Senator Manny Pacquiao will be fighting UFC superstar Conor McGregor next year. The huge portion of his earnings will proceed to those who are affected nationwide by the pandemic.”

McGregor, who last fought in January with a 40-second knockout of Donald Cerrone at UFC 246, announced his retirement from fighting in June.

It is the third time he has done so in four years, and he once again looks set to return to the Octagon as he is currently pursuing a fight with Dustin Poirier – whom he beat back in 2014 – before the end of the year.

Pacquiao, 41, is an eight-weight world champion in the ring and the reigning WBA welterweight title holder, which will not be on the line if he fights ‘The Notorious.’

McGregor, 32, surprised some by lasting until the 10th round when he faced Mayweather, but the possibility of him putting a dent in the American’s perfect record – which he extended to 50-0 – was always highly unlikely.

Mayweather took home a cool $275 million from the crossover, while McGregor’s earnings weren’t too shabby either at approximately $85 million, according to Forbes, so a clash with Pacquiao could prove similarly lucrative. 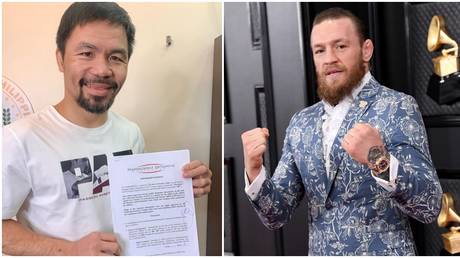