Footage of a bizarre warm-up motivation technique, which shows a judo coach slapping his female charge in the face as she was about to compete in an important Tokyo 2020 Olympic Games face-off, has gone viral online.

In the clip, which has been seen a million times already, Germany’s Martyna Trajdos coolly makes her way down the corridor with her coach Claudiu Pusa.

Then, in a surprise move, she turns round to get ready to step on the mats as Pusa grabs Trajdos by the scruff of her kimono, yanks her towards him and then gives her a slap on each cheek.

Unfortunately the odd ritual had little effect on her performance, as the German fell to Hungary’s Szofi Ozbas in the round of 32 of the women’s -63 kg category.

But the clip has become widely popular on social media with various comments both amused and outraged.

“Please let Real Madrid sign him before going out on the pitch!” said one Spanish user, while another remarked: “This is better than a coffee.”

“It’s normal for some disciplines,” an unoffended party pointed out.

“In weightlifting, the athletes are also slapped before stepping onto the pier. They also use sober salts for this. The German athlete does not look outraged.”

“Less hysteria,” demanded someone else. “It’s all at her own request.

“At least that’s how she presented it personally in the media – it’s supposed to warm her up and stimulate her to fight.”

Elsewhere, Trajdos has also taken to social media in a bid to quell the uproar, and has seen the funny side of things.

“Looks like this was not hard enough,” she joked alongside laughing and facepalm emojis, while sharing footage of the clip to Instagram.

“I wish I could have made a different headline today.”

“As I already said that’s the ritual which I chose pre-competition!”

“My coach is just doing what I want him to do to fire me up!,” Trajdos concluded. 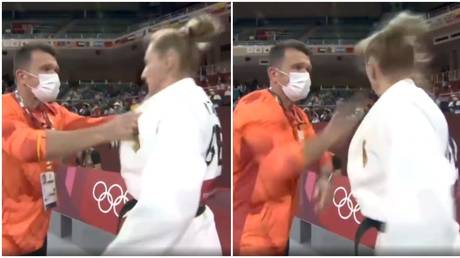 Ireland hopes to fully inoculate a...

‘Are mental health issues the go-t...