Barcelona president Josep Maria Bartomeu is willing to step down in a last-ditch bid to convince Lionel Messi to stay at the club after the star informed the Catalan giants that he wants to leave this summer, according to reports.

Messi, 33, informed Barcelona by fax on Tuesday that he wanted to exercise the clause in his contract which unilaterally allows him to walk away for free at the end of the season.

Barcelona have already said they dispute that interpretation of the clause, asserting that it expired in June regardless of the prolonged season caused by the Covid-19 pandemic.

One of the key protagonists in the saga is beleaguered Barcelona president Josep Maria Bartomeu, who has been accused by fans of disastrous mismanagement of the club and dragging it into the current crisis.

Shell-shocked members of the Barcelona faithful again took to the Nou Camp on Wednesday to demand Bartomeu’s resignation, even storming the grounds before police restored order.

According to Spanish outlet Marca, Bartomeu has now caved in to the pressure, vowing that he will step aside if club captain Messi offers a public guarantee that he will remain.

It may be too little, too late, however, with separate reports indicating that Messi is already set on reuniting with former Barcelona boss Pep Guardiola at Manchester City.

The departure of six-time Ballon d’Or winner Messi would signal the end of an era for Barcelona, the club he moved to from Argentina as a 13-year-old boy.

The number 10 is Barcelona’s all-time top scorer with  634 goals in 731 appearances, helping the club to 10 La Liga titles and four Champions League crowns, among other accolades.

Messi’s transfer push comes on the back of a disastrous 2019-2020 season for the Catalan giants, during which they relinquished the La Liga title to arch rivals Real Madrid, before being dumped out of the Champions League in a humiliating 8-2 battering by Bayern Munich.

That precipitated the sacking of manager Quique Setien and his replacement by Ronald Koeman, although emergency talks between Messi and the Dutchman are said to have gone badly last week, after Koeman signaled the end of “privileges” for the Barca skipper. 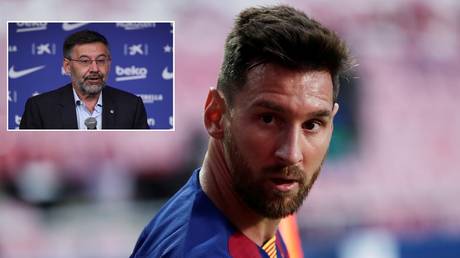