UFC champion Khabib Nurmagomedov, who is a keen follower of “The Beautiful Game”, has paid tribute to Argentinian football legend Diego Maradona, who passed away following a heart attack in his native country on Wednesday.

A wave of emotion has been apparent online since it was announced on Wednesday that one of football’s most enduring legends had died.

Tributes for the fallen icon have been coming in thick and fast from the football world and the larger sporting community as a whole, with Khabib being among the first from the mixed martial arts landscape to reference Maradona’s passing online.

“One of the greatest athletes of all time,” Khabib wrote in an Instagram post alongside an emoji of the Argentinian flag.

“Because of Maradona, millions [of] people love football.”

It is hard to argue that point. The sheer outpouring of grief in the hours since Maradona’s death was announced proves this, already leading to three days of national mourning being announced in Argentina, to Napoli discussing plans to rename their stadium after their most famous of sons.

But as Khabib says, Maradona’s influence will endure long after he is gone and his influence will be felt by every schoolkid practicing ‘keepie-uppies’ on their neighborhood streets, or every young Argentine who dreams of being a professional football. Remember, that was Lionel Messi once.

And as Khabib suggests, these memories will never fade. 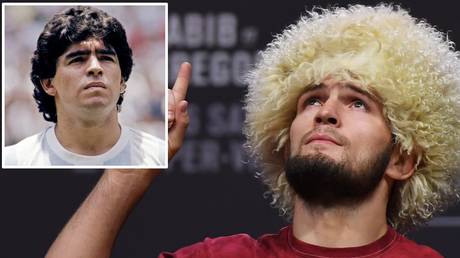