UFC flyweight Ariane Lipski proved her ‘Queen of Violence’ nickname is no mere moniker as she produced one of the most brutally painful submissions of recent times against fellow Brazilian Luana Carolina on Fight Island.

Lipski needed less than 90 seconds to win her contest with Carolina in Abu Dhabi, locking in a kneebar which left her rival writhing in agony on the mat and social media collectively wincing.

Lipski was already in top position and looking to finish the fight when she took hold of Carolina’s left leg, hauling it backwards with full force as the limb contorted disturbingly.

The referee stepped in to call off the fight, handing Lipski a second win from four UFC contests – and leaving pundits and Twitter users hailing a submission-of-the-year contender.

Can someone remind me of this submission come December? Definite sub of the year contender right here. https://t.co/5Fx4Lr9xp0

Recently-retired two-weight champ Henry Cejudo called for Lipski to be handed a $50,000 Performance of the Night bonus (a wish later fulfilled by UFC boss Dana White) as others raved at the ‘beautiful brutality’ of the excruciating move.

This knee bar made me wince. God that was beautifully brutal. Queen of violence indeed.

Despite the savage-looking nature of the submission, initial reports were that Carolina had avoided a fracture but was still awaiting the results of an MRI to determine if there was longer-term damage.

With the loss, the Sao Paulo fighter known as ‘Dread’ suffered her second defeat in eight professional outings.

Quick update on Luana Carolina, courtesy of her manager Lucas Lutkus: X-ray showed no fracture, they are now waiting to get an MRI done.

Lipski, meanwhile, vowed that she is destined for bigger and better things after her impressive performance on Yas Island.

The 26-year-old now stands 13-5 in her career and has bounced back with two wins on the spin following consecutive defeats in her opening two UFC bouts.

“I have much more to show than what I just showed.” 😳@Ariane_lipski is living up to the Violence Queen name 👑#UFCFightIsland2 pic.twitter.com/H6G3F9jJZh

In the main event on a card titled ‘Fight Island 2’, Brazil’s Deiveson Figueiredo was crowned new UFC flyweight champion after dominating Joseph Benavidez in their rematch.

Figueiredo picked up a Performance of the Night bonus to go with the 125 lbs title. 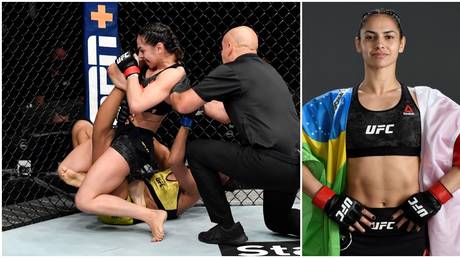