Russian four-time world champion gymnast Aleksandra Soldatova has given us ample view of her supple figure by posting sizzling beachside snaps in her underwear on Instagram.

The 22-year-old showed off her svelte figure in a trendy Calvin Klein number with the caption: “I’m waiting, waiting for when we can dash off to the sea… and better the ocean.”

It’s not the first time the supple Soldatova has shown off her seaside skills, earlier in June she posed on a paddleboard while literally bending over backwards.

That came after another photoshoot where the team and ribbon world champion dazzled on the tennis court in just a blazer and her underwear.

Soldatova is one of Russia’s top athletes and was expected to battle it out for a place on the Russian team for the Tokyo Olympics, before the tournament had to be rescheduled due to the outbreak of Covid-19. 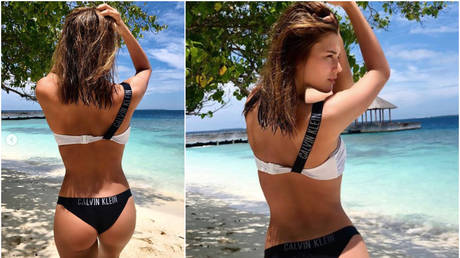