Close
Trending News
HomeSport‘Be ready’: Roy Jones Jr insists he WILL NOT pull out of Mike Tyson fight despite hitches with deal (VIDEO)

‘Be ready’: Roy Jones Jr insists he WILL NOT pull out of Mike Tyson fight despite hitches with deal (VIDEO)

‘Be ready’: Roy Jones Jr insists he WILL NOT pull out of Mike Tyson fight despite hitches with deal (VIDEO)

Boxing great Roy Jones Jr says his November fight with Mike Tyson is on despite some last-minute hitches which required the bout with his fellow ring legend to be moved from its original September date.

Reports circulated this week that former multiple-weight world champion Jones was unhappy that the fight, which was to take place on September 12, was moved to a November 28 date to allow for further broadcasting and promotional deals to be struck ahead of the much-hyped exhibition.

This fueled speculation that Jones Jr. could decide to withdraw from the fight, after he admitted that the switch had upset his plans for later in the year.

“Why would I change the date and mess up the rest of my year when I agreed to September 12,” he said this week. “They said they wanted to get a crowd, if you want to get a crowd, that’s a different type of money. If you want a big event, that’s a different type of money. You think I’m going to say, ‘OK, let’s look at my money, but I’m not getting no better percent.’ How dumb is that to me? So let’s see what happens.”

Jones Jr explained further that because he is no longer a full-time professional boxer, he seeks his income from other means – and the delay in the fight has interrupted his schedule.

However, speaking on Instagram late on Monday Jones Jr. affirmed that the fight still has his full focus and that he will be ready once the late November date rolls around.

“I said what I said and I meant what I said,” he said of his protestations. “I’m no fool and I’m not going to be treated like one. Come November 28, now I get to go act the fool which is what I want to do anyway.

“So now they gave me a new term, a new date and a new chance to act the fool which is what I love to do anyway. Come November 28, I’m coming to act the fool. Be ready.”

The fight will represent Tyson’s first bout in 15 years since the now-54 year old retired following a surprise defeat to Ireland’s Kevin McBride. Jones Jr, meanwhile, competed professionally as recently as two years ago and is three years younger than the former heavyweight champion.

The fight will be the latest instance of boxers opting to come out of retirement for one last hurrah in the ring. Another former world champion fighter, Oscar De La Hoya, recently announced his intentions for a comeback fight at the age of 47. 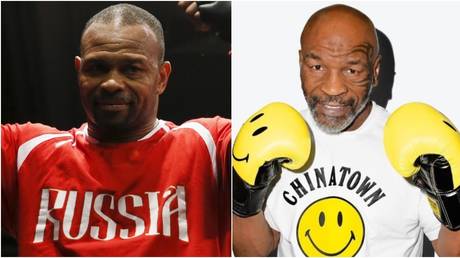