San Diego Padres outfielder Tommy Pham is recovering after being stabbed in the back outside a strip club in the city on Sunday night.

Pham reportedly became involved in an altercation after leaving the Pacers Showgirls International club in the Midway District of the city when he saw two people arguing near his car.

After asking the unknown pair to move away from the vehicle, the 32-year-old MLB star was stabbed in his lower back, the San Diego Tribune reported.

Pham was taken to hospital for treatment on what was described as a “slash wound” but avoided serious injury as the blade did not damage any organs.

“I’d like to thank the incredible medical staff at UC San Diego Health for taking such great care of me last night,” Pham said in a statement released by the team.

“I truly appreciate the hard work of the (San Diego Police Department) as well as they continue their search for the suspects.

“While it was a very traumatic and eye-opening experience for me, I’m on the road to recovery and I know I’ll be back to my offseason training routine in no time.”

The Padres added that Pham “is currently in good condition is expected to make a full recovery.”

No arrests have been made so far and local police continue to search for the suspects.

Pham and the Padres were swept from the National League Division Series by the Los Angeles Dodgers on Friday when the Dodgers wrapped up a 3-0 series victory, ending the Padres season.

Pham was traded to the Padres from the Tampa Bay Rays at the end of last year, having also spent four years at the St. Louis Cardinals earlier in his career. 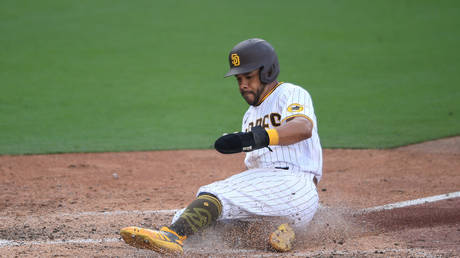