Thom Brennaman has been suspended from commentary duties by baseball’s Cincinnati Reds after using a homophobic slur on air – but not before he called a home run during his televised apology.

Brennaman was overheard on the Fox Sports Ohio broadcast using the term, “One of the f*g capitals of the world,” during his duties, without it being immediately clear to where, or whom, he was referring. It came as the broadcast resumed after a commercial break during a double-header between the Reds and the Kansas City Royals.

Video of Brenneman’s remarks soon made it to social media, where #FireThom began trending – leading to the MLB side issuing an statement, saying that the “organization is devastated by the horrific, homophobic remark.”

Seriously, Thom Brennaman calling a Home Run in the middle of a career altering apology is unintentionally the funniest video of 2020 pic.twitter.com/OsCoaWdoHA

Furthermore, Brenneman was “pulled off the air, and effective immediately was suspended from doing Reds broadcasts,” according to the team’s statement.

Later in the game when returning from a commercial break, Brenneman attempted to make an apology before he was pulled off the air.

“I made a comment earlier tonight that I guess went out over the air that I am deeply ashamed of,” Brennaman said. “If I have hurt anyone out there, I can’t tell you how much I say from the bottom of my heart I’m so very, very sorry. I pride myself and think of myself as a man of faith.”

However, Brenneman was forced to adjust mid-apology to call a home run – before continuing, saying that he expects his career to be in jeopardy as a result of his actions.

The home run lands in front of the “JUDGEMENT FREE ZONE” 😬 pic.twitter.com/6BPxUBS1H0

So Thom Brenneman apologizes to the people who sign his paychecks, but not the community he slandered? I’m not a part of that community so I won’t speak on what should happen to his job, but I would be surprised if he ever calls another game. Terrible apology.

Thom Brenneman didn’t make a mistake. He thought he was off the air and used a word he obviously uses frequently. Homophobia has no place in baseball and no place in society. Full stop.

He should be fired and he can get the FOH with that bullshit “apology.”

“That is not who I am and never has been, and I’d like to think maybe I could have some people that can back that up. I am very, very sorry and I beg for your forgiveness.”

Whether or not that forgiveness comes will remain to be seen, but it certainly hasn’t been delivered from the higher-ups at Fox Sports just yet, after they announced in a statement that the support the Reds’ decision to suspend the announcer indefinitely. 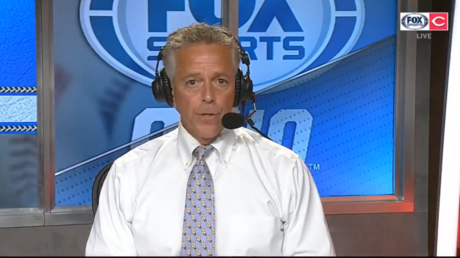 'They were burning churches a...