Lionel Messi and Barcelona appear set for a bitter legal battle after the star demanded to leave, with bosses at the Catalan giants willing to accept nothing less than a world record fee for the player, according to reports.

Messi dropped a bombshell on Barcelona on Tuesday when he officially informed the club by burofax – the Spanish postal service system used when it is legally necessary to prove that a document was sent – that he intends to leave the Nou Camp this summer.

Messi and his team argue that he can activate a clause in his contract that allows him to unilaterally walk away from Barcelona for free at the end of each season.

That is disputed by the club, who claim that the clause expired in June and that the coronavirus-enforced extension to the season has no effect on the deal, meaning Messi is under contract until 2021.

But with Messi seemingly intent on leaving one way or another, Barca officials may be forced to accept they cannot keep him at the Nou Camp – in which case they will not let him leave cheaply.

According to Spanish outlet AS, Barcelona are determined not to part with their star number 10 for anything less than a world-record fee, meaning any offer would have to eclipse the €222 million ($262 million) that Paris Saint-Germain paid for Neymar when he moved from the Catalan giants in 2017.

Even for a player of 33-year-old Messi’s caliber, that price tag could be a major stumbling block for any potential suitors, given the uncertain financial climate brought about by the coronavirus as well as UEFA Financial Fair Play (FFP) regulations.

Messi took the decision to quit Barcelona – the club he joined as a 13-year-old – after a disastrous season saw the Catalans lose out in the La Liga title race to Real Madrid before suffering a humiliating 8-2 defeat to Bayern Munich in the Champions League quarterfinals.

Messi was said to be angered by his first meeting last week with new Barcelona manager Ronald Koeman, who replaced the sacked Quique Setien in the wake of the defeat to Bayern.

Koeman is said to have told Messi that his “privileges were over” in the team, while the Argentine is likely to have been further frustrated by the treatment of his friend and strike partner Luis Suarez, who was told in a terse telephone conversation this week that he was no longer wanted at the club.

There have been suggestions that Messi’s demand to leave is merely a power-flex to force unpopular president Josep Maria Bartomeu out of the club, although most indications are that the Argentine star is genuine in his demands to force his way out this summer.

The frontrunners to land Messi are believed to be Manchester City, where the footballer would have the chance to link up with former manager Pep Guardiola.

Reports this week have suggested that the English club have already looked at ways of making any deal with Messi work financially, although his move from the Nou Camp could hinge on what transfer fee – if any – is demanded by the Catalan giants. 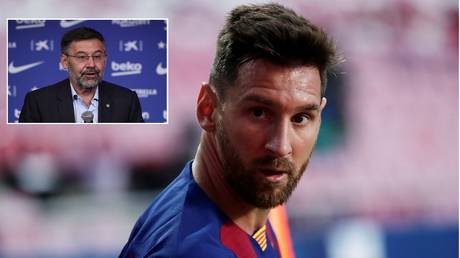